There's a new kid in town 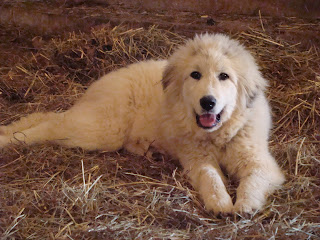 This cute girl showed up here on April Fool's Day (hope that's not a sign!) Neighbors from a mile down the road (in the country, that is a neighbor) drove into the farm lane Tuesday morning with this girl running behind their truck. They assumed she must be ours because we are the only weird people with the sheep and big white dogs around this part of the county. Well, it's starting to look as though she may be ours. We've called everyone we know to report that she is here, if anyone wants to claim her. So far, no calls. She is about 6 months old and now that she has had a few days of good food and sleeping, she is full of energy. She is a little slow to catch on, but the big dogs have told her repeatedly it is not nice to jump on a 9 or a 10 year old Great Pyrenees' head! She really, really wants them to play with her. They keep telling her to get serious, there's work to be done guarding these sheep. Eventually, Hannah, the 5 year old we have, will make up with her and play some, but right now she is sulking about not being the "baby" anymore!
Posted by Dianne MacDonald at 11:33 AM