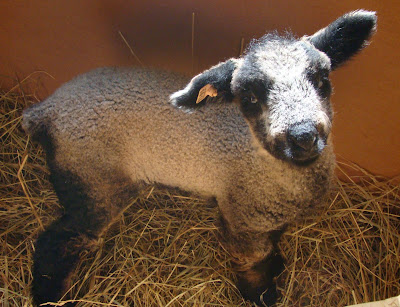 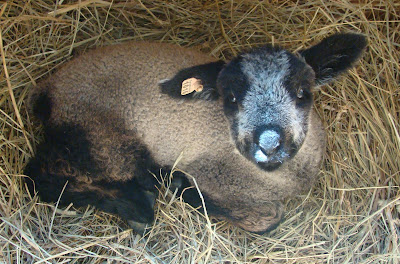 Now, regarding that BFF---at this point in time the friendship is pretty much one-sided. I like her, but she's not that crazy about me.......unless I have a bottle in my hand. Olive is one of the triplets that belong to Miss Bossy and she's been getting the short end of the milk ration. If I could catch her, she would suck a bottle down in no time. The big trick was catching her. Miss Bossy is my nut-case. She's got a beautiful fleece and produced triplets as a two year old, first time lambing. Still, she makes me crazy. She's flighty and causes disruption in the whole flock. Whenever I get near her, she tramples everyone in sight to get away from me---including her own lambs. As far as I'm concerned, she's on borrowed time! Yesterday I decided I'd had enough of the lamb rodeo and brought Olive to the house. Her current home is in a big box in the sunroom (which she managed to jump out of 5 minutes after I put her in there). I'm hoping after a few days of TLC and having a tummy full of warm milk on a regular basis, I'll be able to win her over. I've never brought a lamb this old into the house to become a full time bottle baby, so stay tuned. This could be interesting!
Posted by Dianne MacDonald at 10:57 AM 6 comments: 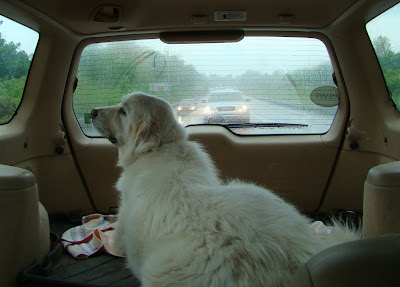 Audrey came with enough issues to cause most sane people to say "sorry, but no thanks". The story is that she was on the loose for several months and was finally brought in to the shelter nearly starving. When we brought her home with us, we discovered that she was pregnant and had far too much interest in our chickens. I admit that the first few days she was here, I had doubts that I could manage her. She was keenly interested in the chickens and when I took her out with the sheep, she worked the fields like a bird dog on the trail on something exciting, though not in any way threatening to the sheep. When she acted too enthusiastic around the lambs, the ewes corrected her and she immediately learned to respect them. At this point, we've made great progress on curbing her desire to chase the poultry (though I'm not ready to trust her for long periods of time, unsupervised). She and Holly are beginning to bond, which will be good for everyone. She is an incredibly sweet, sensitive dog and we're really hoping she will make a place for herself here.
The picture above was taken on the way in for surgery today. We decided to spay her now rather than allow her pregnancy to continue. Because she was on the loose for so long, there was absolutely no predicting what sort of dog might have bred her. It may seem cruel to some, but the idea of bringing a litter of puppies into the world that likely no one would want seemed infinitely more cruel. We felt Audrey had physically suffered enough and needed to be nurtured back to health, without the further strain of feeding a litter of puppies. So, as I write this, she is sleeping in the kennel in the barn and hopefully on the road to gaining back her health.
I am not so soft hearted as to take in every animal that comes along, but something about Audrey touched both Mike and me. We're going to do our best to give her the home she needs.
Posted by Dianne MacDonald at 6:30 PM 13 comments: 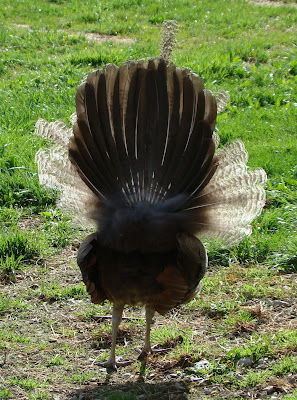 I'm dating myself here, but remember that song from the movie "Urban Cowboy"? The lyrics went something like....."I was looking for love in all the wrong places". Those words keep repeating in my brain every time I see Wally spreading his meager tail feathers (he can't help it-peacocks don't get the full compliment of showy tail feathers until they are three years old). He walks around all day showing off to the chickens. They are not impressed. Dear old dad (Mr. Dandy) can really put on a show right now and that's bound to be hard on a young guy's ego.

Poor Wally. There is also the problem of no available females. Don't even get me started on that. We are not amused at the idea of having more peafowl chicks and are determined to prevent Mrs. Dandy from hatching out any this year. It took us forever to get rid of....uh, I mean, find loving homes for the last batch. In fact, while loitering in the lighting department at Lowe's just the other day (picking out a lights for the studio), I ran into a friend who adopted a pair of the chicks from last summer. The first thing he said to me was that I had under-estimated exactly how many reminders they would be leaving on his porch every day. At least he's still speaking to us.
Posted by Dianne MacDonald at 6:05 PM 6 comments:

Email ThisBlogThis!Share to TwitterShare to FacebookShare to Pinterest
Labels: Peafowl

My babies are leaving home 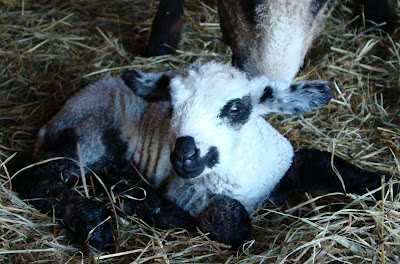 As of early this afternoon, we are officially finished with 2010 lambing season. Fiona, a CVM ewe that I bred when she was not quite a year old (not something I usually do) gave birth to a beautiful ewe lamb. Just look at those markings! This little girl has stolen my heart already!

I'm very pleased with how things have gone this year. No big catastrophes (always a good thing) and, once again, an over 200% lamb crop. We have had 25 lambs out of 12 ewes (three sets of triplets, 2 singles and the rest twins). The boy/girl count is 12 ram lambs and 13 ewe lambs. 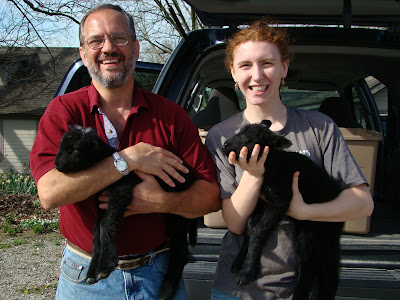 Hannah and her father, Tom

I don't often let my lambs go until they are several months old (with the exception of Graham Lamb, who went off to Sara's to achieve stardom and fame!). This year has been unusual because I have had several people wanting bottle babies. The past two years I had an abundance of bottle babies because I had several old ewes who had triplets and just could not feed that many lambs. This year I bred mostly young ewes and they've been doing a good job of raising their babies without my help. I did have one twin rejected and I made an executive decision to take one triplet from a first time mother who seemed just a little nervous about having so many mouths to feed. Those two babies stayed here until they were well established on the bottle and then went home with a young woman I met last year at the Kentucky Wool Festival in Falmouth. She's been waiting patiently all this time for some bottle babies to raise. Hannah and her father came last week to pick up the boy and girl and, from the reports I'm getting, it sounds as though she is doing a wonderful job with them. 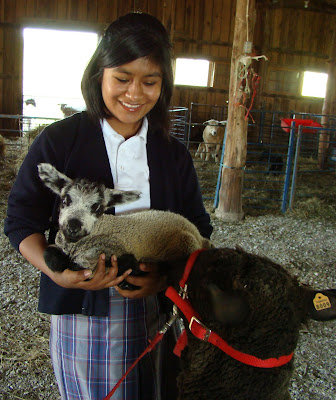 This afternoon, not only have two more babies left, but their mom went with them. Lindy's daughter, Mirian, decided that she wanted some lambs months ago and after talking it over, we decided that taking an adult ewe and her lambs might work out better than having bottle babies, especially since Mirian wanted to do all of the care and she will be in school for another six weeks or so. The ewe previously known as Tiny (and she's definitely not tiny anymore) is now named Pepper and she got the prize for having the cutest lambs of the year. Though it is difficult for me to sell my lambs at any age, I do feel good about the homes they are going to and I'm pretty sure I have visitation rights!
Posted by Dianne MacDonald at 3:34 PM 2 comments: 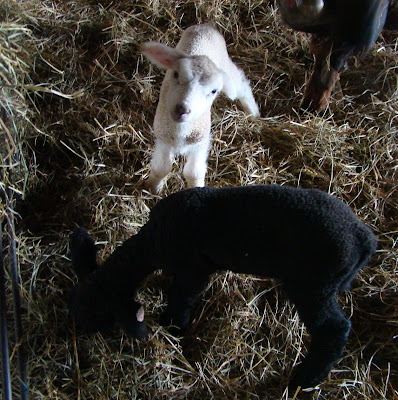 Remember this poor mom? Well, she's breathing a lot better now that she's off-loaded these two bundles of energy. These are the two basketballs we were all wondering about last week. They were born on Easter Sunday evening, just after all the family left. Guess she was waiting for a little privacy and quiet! They are two big, healthy boys and they are obviously getting plenty of milk from mom because they have energy to spare! They go at full tilt, running, climbing on mom's back, jumping and just generally getting into things. Next thing you know, they look like this. (Notice mom takes the opportunity to take a nap while the kiddies are quiet!) 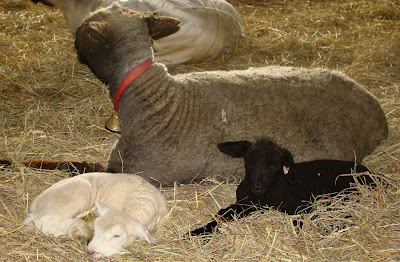 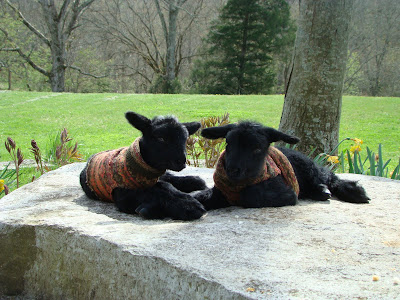 We only have Easter lambies around here! These two lambs became the starring attraction at Nana's (that would be me) this year. Forget about that Easter egg hunt! They all just wanted to hold the lambs. Due to some unusual circumstances, I ended up with two bottle babies in the house during Easter weekend and it turned out to be a really fun thing for the grandkids. We always have the whole family here for Easter and have a tradition of taking pictures of each family group seated on a huge rock that marks the family cemetery of former owners of the farm. This year, every family group picture included the lambs! The lambs seemed to love all the attention, but they were some tired babies at the end of the day! 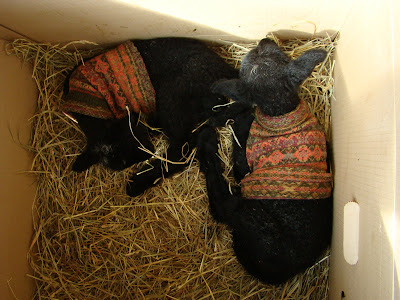 Besides having the whole family here for Easter Sunday, we had a productive weekend in the lambing barn. There were four sets of twins and one set of triplets born. We now have 17 lambs on the ground......8 ewe lambs and 9 ram lambs. There will be a little break in the action now and then we should finish up with the last four ewes lambing next weekend.
Posted by Dianne MacDonald at 11:22 AM 10 comments:

Who said basketball season was over? 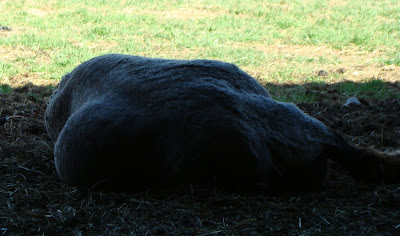 Kentucky finished their season (and a fine one it was!) last week, but it sorta looks like we still have basketball going on around here. 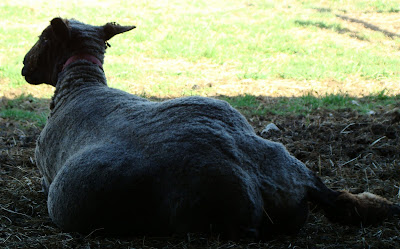 This girl was snoozing in the shade of the shed, while I was helping clean up the newest set of twins (both boys) born yesterday afternoon. Her turn is coming in the next couple of days and I know it can't be too soon, as far as she is concerned. 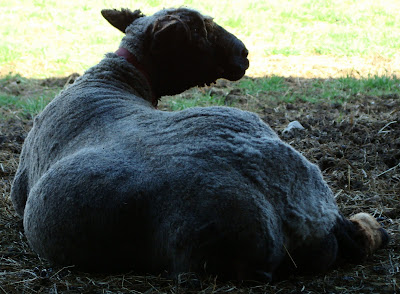 I can only imagine how difficult it must be to carry all that around, much less try to sleep comfortably. So, what do you think? Big twins or triplets? 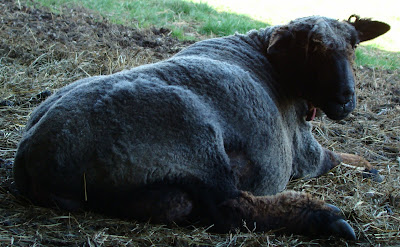