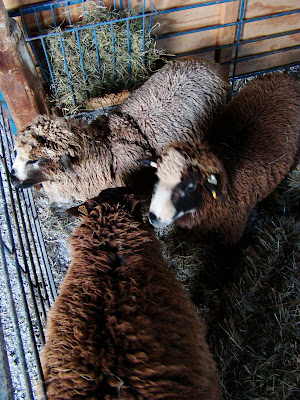 This week it has been all about the boys. Last Sunday we took Ollie out of the ewe flock and put him in with the other two rams. It's a bit touchy when they get back together after breeding season. In order to keep them from injuring each other, they have to be contained in a very small space.....small enough that they can't back up and gain momentum to get in a good whack at each other. Sometimes it takes a few days for them to settle down and stop trying to beat each other up. The first afternoon we put a few hay bales in the pen to slow them down even more, but Ollie discovered that he could climb up on the bales and jump over the side of the pen. (I could just imagine him saying, "That's it. I'm outta here!!") So, my next idea was to put two plastic garbage cans in the pen with them. Although they were still pushing and shoving each other a little, there was no more head butting. On the second day, I opened the pen up and gave them a little more room and by the third day they were allowed to go out in the field. Now they are best buds again. 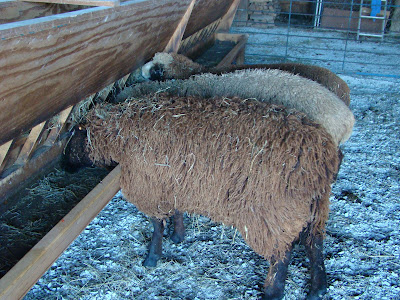 Notice the shoulder to shoulder positions at the feeder. Sure they're friends again, but there's no sense letting the other guy have an advantage at mealtime. Also, notice all that hay on Mr. Lucky's back. After all the work to keep their fleeces clean and this is what they do. Hopefully, most of that will blow off.
Posted by Dianne MacDonald at 11:50 PM