It is seriously hard to believe that Thanksgiving is just days away when the temperature is 71 degrees, which it was yesterday. We had a big storm blow through early this morning and it is bringing a big change our way. Right now the forecast is for a chance of snow flakes early Friday morning. I pity those poor folks who are planning on getting up early to get some Black Friday bargains, which is one thing I can honestly say I will never do! I don't even like going into the mall or any of those big box stores on regular days!

Yesterday I took these pictures of the ewe flock grazing in what we call the outfield. It's the one farthest from the barn. Holly doesn't really like for the ewes to go there. It's bordered by the woods and coyotes often come into the pastures from there. I opened the gate to that area recently because there is so much good grazing there and practically nothing to eat in the other fields. During the day, Holly allows the ewes to go there for a short time and then she will move them back into their regular field. It's an interesting exercise to watch and it reassures me that Holly is doing her job. 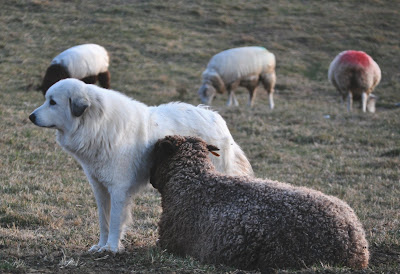 I love watching what happens between these two. This old girl spends a lot of her day resting and Holly is usually close by, keeping watch. I like to think that the ewe is comforted by Holly's watchful presence.

(Edited to add: I'm planning a little giveaway for "Black Friday". Don't you think it would be the ultimate bargain to get something for free? Just check back here and I'll put up a post with pictures of the goods!)
Posted by Dianne MacDonald at 10:40 AM