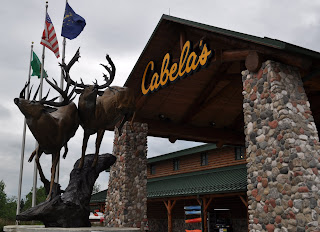 His idea of a good time? See above picture. On our way to the Chicago area this past weekend, Mike had it all planned out. We were going to stop at Cabelas for some fishing equipment purchases. Those who know my husband, know that he is, umm, thoughtful about such things. He likes to do lots of research, think about all the pros and cons, consider all the options and then, maybe, he's ready to make the move. I knew that even though all of the above had been done, it was not going to be a quick stop. I understood. I was prepared. I needed to replace my favorite Cabelas barn boots and I had plenty of knitting to keep me occupied. Sadly, my boots were not in stock and will need to be ordered on-line. (I did manage to buy a Life is Good t-shirt on sale.)

My idea of a good time. The reason we were on the road to begin with was that we were heading to the Midwest Fiber and Folk Art Fair, in Grayslake, Illinois (that's about half an hour outside Chicago). I was signed up to take workshops on natural dyeing and button making. This was the second year thecrazysheeplady and I have taken workshops, while the menfolk occupied themselves floating down some stream in fishing kayaks. Midwest is not a large fair, but the selection of vendors is good and they have offered some outstanding classes. It's worth the trip, if you are so inclined to do such things. 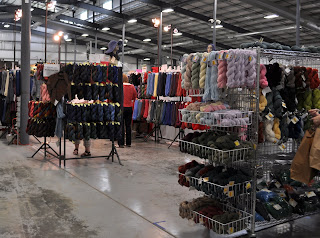 My workshops were great. I had taken a natural dye class many, many years ago from Michelle Whiplinger, but will admit that commercial dyes seem less intimidating. Stefania Isaacson taught this dye workshop. One of our exercises was over-dyeing with indigo and, wow, was that magic! I'm finding that every time I'm out in public with my roving and/or yarn, often the first question I'm asked is if I use natural dyes. So, I'm thinking I'll give it a try. The button class, taught by Lynn Bergschultz, was fun and is for sure something I'm going to be doing.

So, it's back to reality now. The grass and the garden have grown like crazy in just the few days we were away. I need to be on the mower instead of playing with some new acquisitions* in the studio.