Simply put, it was the best.  All I could ever hope for and then some.  I kept hearing about how "magic" it was at Squam, how it would renew my spirit to be in the company of such like-minded women and that the lake itself would be a balm to my soul.  It was all of that and more.  Where to begin?

As I expressed here before I left, I had some insecurities about going because I wouldn't know anyone and I was afraid I might win some kind of award for being the oldest camper there.  Within minutes of arriving there, both fears were put to rest.  Even for someone as introverted as me, making new friends was easy.  All I had to do was talk to the person sitting next to me at dinner or in one of my workshops.  There were women of all ages and it became clear that age was not a significant factor in my being able to connect with others. 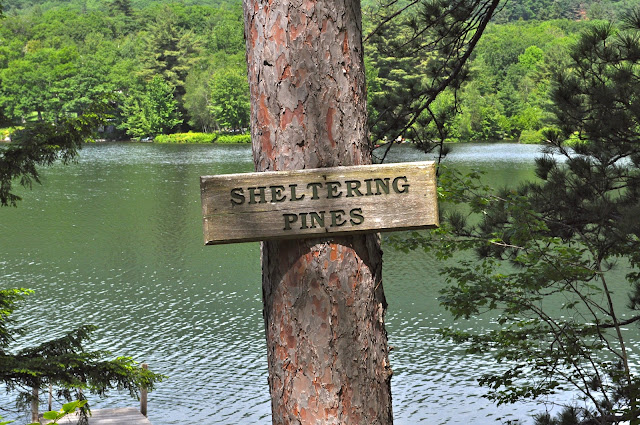 So, let me start at the beginning.  Mike dropped me off at Squam around 3 o'clock on Wednesday and when I walked into the registration area, I was greeted warmly, given my Squam tote (with goodies inside) and then one of the camp staffers put me in a golf cart, with my heavy, heavy bags, and took me to my cabin.  Two of my cabin-mates were already there and it felt so natural to start right in getting to know each other.  When the dinner bell rang a few hours later, we'd already shared a glass of wine and were settled into our home for the next few days.  After dinner there was a short welcoming program and introduction of all the teachers.  Instead of having the teachers tell about themselves, they were asked to relate something about a person who had been a significant influence in their lives. Not only did it introduce us to the teachers, but gave us some valuable insight into who they really were. At that point, I was already relaxing into the Squam atmosphere.

Thursday was my photography workshop, titled Spirit Session, with Thea Coughlin. It just might be one of my all time favorite life experiences.  Thea is so warm and encouraging, she was able to ease me into believing that, yes, I could learn to operate my camera in manual mode!  I have a long way to go, but finally I am not so intimidated by my camera.  I tend to function on a much more intuitive level than a logical, planned method and those aperture, f-stop, shutter speed, iso numbers were Greek to me.  Finally, the light blub in my head has begun to glimmer in the darkness.  It's going to take me a long time to understand and apply it all, but at long last I'm headed in the right direction.

Early in the class, Thea shared a personal story about how her mother had died young and how much she wished she had more pictures of her.  Her mom was like so many of us, always not wanting to be in the picture because our hair isn't right or we look too fat or whatever (fill in the blank) and that she never once had looked at a picture of her mom and made those judgements.  I sat there and thought about the fact that my children and grandchildren would have to look hard to find a family picture with me in it because of those same insecurities.  As women, I believe we are so hard on ourselves and it's a difficult habit to break.  I'm resolving to do better.  I gained so much from the class that didn't even involve photography.  It's so interesting to see how we end up being just where we need to be.  I read a post by Maya months ago (and am unable to find right now, but will try to link to later) and it was the main reason I chose to take this class. I'm so grateful I had the opportunity spend time with Thea.

I'm not at all sure how it was done, but somehow, Elizabeth, who organizes Squam, managed to place me with some of the best cabin-mates possible.  The time and experiences I had with them was so comfortable.  It felt as if I was spending time with old friends, not brand new ones.  You know how we always say "let's be sure to keep in touch" ?  Well, I truly believe that it will happen with these women and I hope to be reunited with them at Squam next year.

I have much, much more to share about Squam, but will save it for another post.  Next up, my Botanical Printing class with Maya Donenfeld.
Posted by Dianne MacDonald at 12:59 PM

Email ThisBlogThis!Share to TwitterShare to FacebookShare to Pinterest
Labels: Squam