So far, it's been a busy week on the farm.  Those of you watching the lamb-cam may be wondering where the activity is taking place.  There are now ten ewes in the maternity ward because three of the girls lambed over the weekend.  Saturday, around 9 am, Gabby delivered twin ram lambs.  Those boys have had their tails banded, been ear-tagged and have now gone back in with the still pregnant ewes.  Gabby is a good mother and has plenty of milk, so her lambs are already growing.  Freckles was not so kind in the timing department.  She delivered her twin ram lambs around 5 am Sunday morning.  Thankfully, I woke up and checked on everyone around 4 am and could see she was in labor.  The second lamb tried coming out with just one back leg presented, so it's a good thing I was on hand to do some internal reorganizing and get him out.  When I first started raising sheep, I remember carrying my dog-eared and tattered copy of Paula Simmons book, "Raising Sheep the Modern Way", looking at those sketches of all the ways of lamb malpresentations and praying I would never have to face such scary events.  Ha!  Little did I know that eventually a shepherd faces all of those and more.  I don't even think much about it anymore.  Teeny had her triplet girls Sunday evening, causing us to miss the end of an incredibly exciting Kentucky NCAA basketball game.  I know several people got to witness that one on the lamb-cam. Luckily we had the game set to record, so we finally got to watch the second half around 9 pm.  Triplet ewe lambs and a winning team, both worth waiting for! So, at this point there are 4 ram lambs and 3 ewe lambs, 4 white and 3 black.  I'm already seeing some Wensleydale fleece characteristics in the lambs and I'm already excited about those fleeces!

UPDATE:  The count is now 5 ram lambs and 5 ewe lambs, 5 white and 5 black.  It's a little after 10:30 on Wednesday night and I've just come in from the barn again.  We came to the house several hours ago to have supper and when I turned on the computer, there was Lady Edith with a tiny little black lamb!  I grabbed my phone and we headed back to the barn.  I noticed I had calls from Maryland, Wisconsin and Florida on my phone and upon checking the voice mails, found messages from all those places about the new lamb, plus text messages from my friend Lindy, whose ram sired all these babies and my friend, Teresa (a dedicated lamb-cam watcher).  I checked the lamb, it was a girl and, though tiny, quite strong.  She'd already nursed, which is so great when they manage that first time on their own.  Edith didn't look empty and my hunch was there was another lamb in there.  She couldn't seem to settle down to the business of pushing, so we put her in a lambing jug and palpated her to be sure.  Imagine my surprise when I found an odd combination of legs that didn't seem to go with the head I was feeling!  We switched places and Mike sorted it out and pulled out two more healthy lambs!  At this point, they've all nursed and seem to be doing just fine.  Lady Edith is one of the half-Wensleydale ewes born in 2012, all given Downton Abbey names.  She may not be the prettiest of the bunch, but she's definitely an over-achiever!

UPDATE #2:  No sooner than I'd gotten into bed and checked the iPad for one more look at the maternity ward, there it was ..... another newborn lamb tottering around it's mother.  Back to the barn for me.  Another half Wensleydale , first timer.  She had a nice big single ram lamb and is quite ferocious in care of him.  She stomps her feet every time I go by the mothering-up pen.  So, finally to bed at 2 am for me.  The count stands at 6 ram lambs and 5 ewe lambs this morning.

The remaining eight ewes really and truly look like beached whales now.  They just barely shuffle along to the outside to graze for a while and then shuffle back inside to rest, groaning with every breath.  If they deliver on the 145 day schedule, five more of them will lamb between now and next Wednesday.  The last three should come between April 10 and April 19. 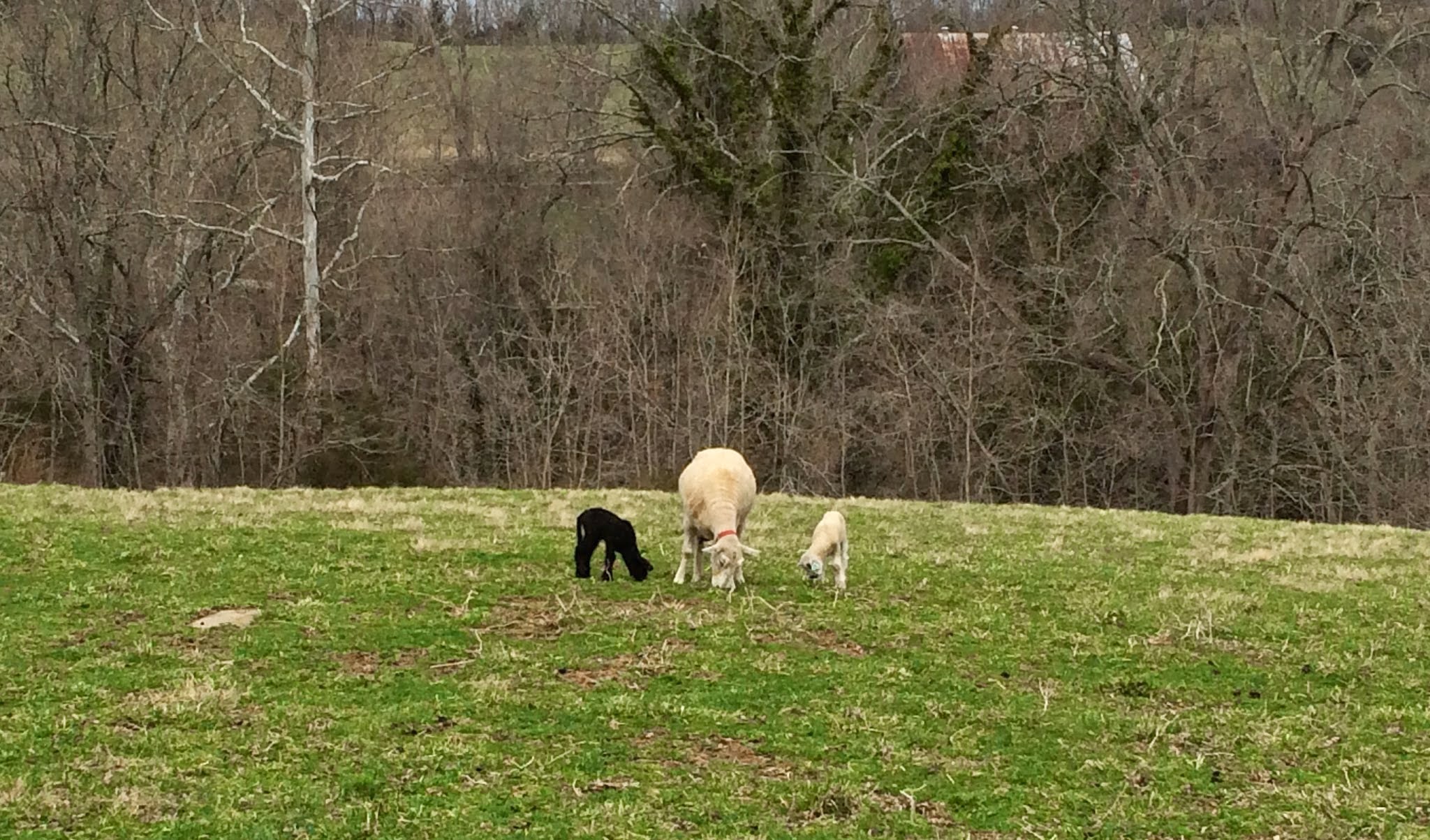 Today is overcast, but warm, so I've let the two sets of twins go outside with their mothers.  There's just the merest hint of grass coming on and they're doing their best to nibble at it.
Posted by Dianne MacDonald at 1:34 PM