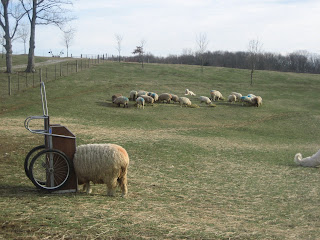 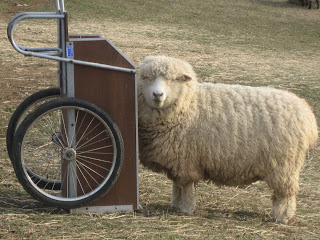 This is Pauladeen and yesterday was sort of her birthday. She was born on Super Bowl Sunday 2004 and had a really rough start to life. Her mother was one of the most expensive purebred sheep we have ever owned and, as bad luck would have it, turned out to be one of the most disasterous experiences we've had on the farm. Sometime mid-morning the ewe went into labor and then prolapsed (pushed her uterus out). It was truly a ghastly sight. We managed to get one of the lambs out alive, but not the twin. Once the lambs were out, we were able to push the uterus back into place and then stitched up the ewe in hopes that she would stop pushing and be able to retain it. Unfortunately, that did not happen and the ewe died the next day. (Yes, we did know what we were doing. I have many, many years of experience and, though vet schools don't teach much about sheep, my husband is a veterinarian who is learning hands-on!) The only bright spot in the whole event was the little ewe lamb. She was too weak to stand and I really thought we might lose her too. I brought her to the house and sat in front of the fireplace with her all afternoon, coaxing her to nurse from a bottle and keeping her warm. While we sat there, Paula Deen (from the food channel) had a marathon of programs on and I watched 3 hours straight of Paula Deen cooking shows. I told my husband if the lamb survived, she would need to be named after Paula Deen. As you can see from the picture, she not only survived, but flourished. She lived in a furniture box in the sunroom for several weeks and eventually graduated to a pen in the barn with her own heat lamp to keep her cozy. When the weather was warm enough she joined the rest of the lambs in the flock. That early bonding with me, as the only mother she has ever known, has made her a very unusual sheep. Even now, if I go outside and yell "Pauladeen", she will come at a gallop! She's a funny girl, always first in line and seems to have her own way of being part of the flock, but not quite like the rest. She's a lovely, big ewe with a fleece that is a handspinner's dream. I'm looking forward to her first lambs being born this spring.
Posted by Dianne MacDonald at 12:21 PM