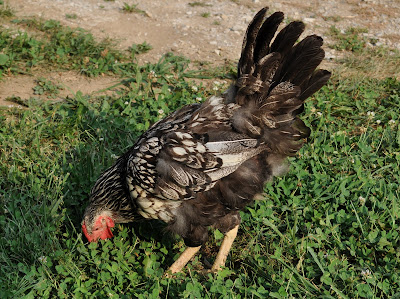 Frenchie is my new outside working buddy. I've been quite stupidly spending time outside the studio building, planting bushes (stupidly because the heat index several days this week has been over 100 degrees). The bushes have been waiting for several weeks now and are getting root-bound in their pots, so I decided I may as well start sticking them in the ground. (I was hoping some young, strapping lad would show up to do the digging, but, alas, that doesn't seem to be happening.) Anyway..........while I've been digging the holes and soaking the plants in water, Frenchie has been hanging out with me and I like having her around. Last year when I ordered chicks, I got two Cuckoo Marans (they're French--get it?), but this girl is the only one left. (An unfortunate incident with a stray/neighbor's dog caused a four hen reduction in my flock a while back.) Cuckoo Marans lay lovely chocolate brown eggs and are calm, friendly hens. Honestly, I hadn't paid that much attention to Frenchie until a few days ago when I noticed the biggest, most aggressive hen in the flock seemed to be picking on her and that Frenchie was scurrying around and trying to keep a low profile. Now, anytime I'm out working around the barn or the new building, Frenchie is right there with me. Clucking softly and walking around looking for treasures (bugs). She even lets me pick her up and carry her. I think she's decided I'm good for some protection.

The politics of the hen house are a never ending mystery to me. It seems everyone is getting along just great (including the two resident banty roosters), then next thing I know, there's all sorts of squabbling and pecking going on. I was gone from the farm yesterday and left the hens confined to their fenced yard. When I fed this morning, it was clear that Frenchie had experienced a rough day. Today, Frenchie is out and about (after some doctoring to her battle wounds) and the rest are under house arrest.

Further poultry news: Wally has disappeared. I hadn't mentioned it earlier because I was hoping he might show up, but it's been several weeks now and I'm about to give up hope. He was the most personable peafowl we've ever had and I miss him greeting me at the feed bins every morning. Just as so often seems to happen here on the farm, a new addition came along just a few days ago. Mrs. Dandy hatched out one chick earlier this week. I've put the two of them in the big dog kennel and hope that she will be diligent in watching out for it. Every day brings the unexpected around here.
Posted by Dianne MacDonald at 6:33 PM