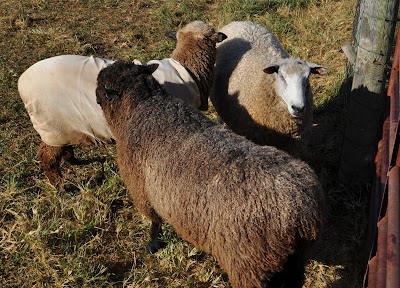 Um, let's start with #1-hard-headed and maybe add #2-single-minded. Thanks to new levels of testosterone around the place right now and some cooler weather at night, the rams have been taking a little longer to adjust than I was hoping. I thought the extreme heat we had been experiencing would keep the head-butting and posturing to a minimum, but Ollie and Henry had other ideas. Mr. Lucky and Buddy wanted no part of the butting matches, so they were excused from the fray. (As a side note: Buddy became a wether after breeding season several years ago, so he does not show any interest in proving he is a candidate for ram-of-the-year. Besides being a wonderful personality to have around, he serves as a babysitter for lambs, companion to anyone needing one and all around good guy.)
Ollie and Henry spent the better part of a week penned up closely in the barn. Every few days, I would let them out into the barnyard and watch their behavior. If the head-butting started....back into the pen they went. Finally, they smelled enough alike to be satisfied with shouldering each other around occasionally. I will say, for an old guy, Henry can hold his own with a much younger ram.
These last pictures were taken this morning (I'm sitting on top of the gate) and the boys are just one big happy group right now. Well, except for Ollie, who, when he is not with his buddies, is pacing the fence looking longingly at the ewe flock (see #2 above). I am not planning on any lambs being born before March, so he will just have to get over it for the time being .

Posted by Dianne MacDonald at 1:22 PM

Email ThisBlogThis!Share to TwitterShare to FacebookShare to Pinterest
Labels: rams