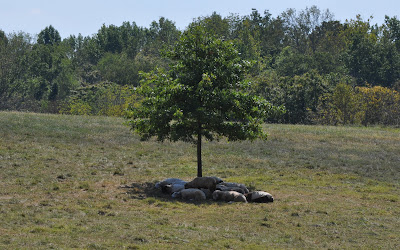 It's still hot here and at this point, our pastures are crunchy. Where the heck is our beautiful autumn weather, is what I want to know? The thermometer outside the studio read 95 degrees at one point yesterday afternoon, though the weatherman said it was only 93 degrees! Same weatherman promises cooler weather on Saturday, but I'm not sure I believe him
. 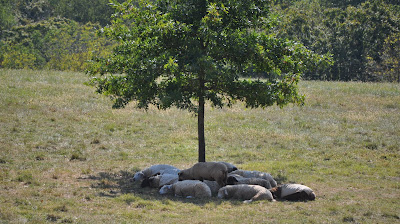 The ewes have insisted on crowding up under this one little tree in the middle of the pasture for several hours each day. I don't know why they are doing this. There's a line of trees along the fence and they will go there finally, after bunching up out there in misery for a while. I would love to know what in the world they are thinking
. 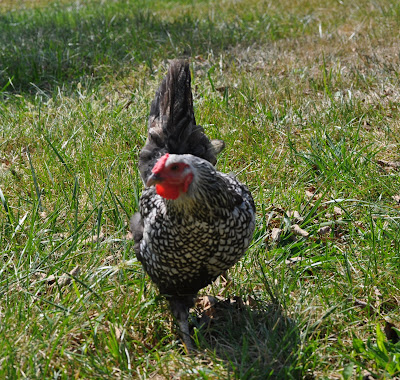 Frenchie, on the other hand, prefers to spend her afternoons under the forsythia bushes in front of the barn or inside the blackberry vines on the garden fence. That is, unless she sees me out and about. Then she's all about keeping me company in whatever I'm doing, which as long as it is this hot, is mainly just moving from one air conditioned space to the next!! I'm just not sure what I should do about Frenchie. I've been putting her inside the big dog kennel at night for safety and letting her out each morning. As soon as I let the rest of the chickens out, she high-tails it out of the barn and hides in one of her safe places. It might be funny, if it weren't so sad. She lives her life in fear of the rest of the flock. I bought 5 Buff Orphington chicks last week and have vague plans to try bonding her with them, but it sure would be easier for me if I had one flock of chickens instead of two separate ones. Ah, the simple life on the farm!
Posted by Dianne MacDonald at 11:31 AM