Boss of the barn 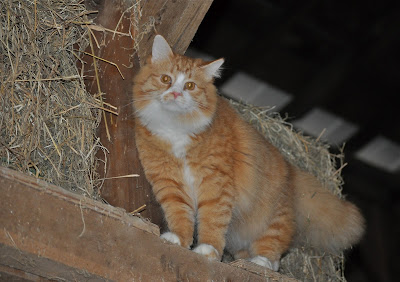 Carson,  our rescue cat,   is really starting to come into his own around here.  We love him and I think the feeling is mutual.  He's such a lovely boy and his personality is so sweet and affectionate.   Sadie,  wild girl that she is,  still pretends she is pushing him around,  but they both know it's just a game now.   Slowly,  slowly he decided to come out of the room in the barn where the cats sleep at night.  I let him pick his own pace for acclimation.  After all,  it's a big barn and there were lots of other critters around that I'm sure he'd never seen before.  For a week I left the door from the workroom standing open and each day he ventured a little further out.   He was quite timid in the beginning and kind of crept around investigating all the nooks and crannies.  The day he discovered the barn loft was the turning point.  He loves going up there.  In fact,  he turns into " Zippy Kitty " and " Boss of the Barn " when he's in the loft.   He and Sadie chase each other around and up and over the stacked up hay bales and he loves going up into the rafters.  He's even gotten brave enough to take a run at the peacock a few times.  I'm pretty sure he now knows he doesn't want to go there anymore.

Carson reminds me so much of my Buster cat.  Buster was not a rescue,  but was given to me at a time in my life when I needed to feel unconditional love .... and he certainly gave me that for many,  many years.   I'm so glad I just happened to be looking at the adoptable pets on the Friends of the Animals of Jessamine County website and saw Carson's picture ( the boy formerly known as Peaches,  no less ! ) .  I believe Carson is glad,  too.  He's part of our farm family now.
Posted by Dianne MacDonald at 1:08 PM