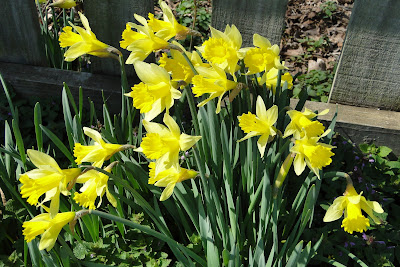 No matter that the calendar still says February.  Spring is most definitely in the air here in central Kentucky.  It's not just a renegade daffodil here and there that's blooming.  There are a host of them up and glowing in the sunshine.  I just keep picking them and bringing them inside to enjoy because the worrier in me is afraid that one morning we'll wake up to all the accumulated winter weather we've missed this year.  Today the sun is shining,  the birds are singing and,  I swear,  the grass is starting to grow.  The best sign of all ?  I heard the peepers last night for the first time !

It was a rough weekend around here.  Some varmint got into the chicken house and killed two big chickens and partially ate them.  Saturday night,  I set a Hava-heart trap inside the chicken house and left the chickens loose in the barn,  thinking they might have a better chance of escaping the murderer.  One of the banty hens made the mistake of settling into a hay feeder used for the lambing pens and got picked off.  I'm really mad now,  but am at a loss as to how to catch the thing.  I'm thinking it might be a mink or weasel because it seems to be much smarter than the average stray possum we've had to trap.   As if that wasn't enough,  my little Luna has been feeling poorly.  She's had an elevated temperature for several days now.  This morning,  I'm finally seeing some improvement from the antibiotics and Banamine.   In the meantime,   I've allowed her to do something I'm certain I'll regret later.  For a few days the only thing she was really enthusiastic about eating was Aslan's dry dog food and I let her clean up what he left in his bowl.   Aslan and Luna seem to have a special friendship.  If I don't fasten the gate to keep her out of the pen where he is fed,  he will step aside and let her have the whole bowl.  He doesn't let any of the other sheep get away with that.

Here's another sign that spring is in the air.  Poor Junior !  Remember that song from ' Urban Cowboy ' that goes ... " lookin' for love in all the wrong places " ?  ( Yes,  I do know how much I'm dating myself here,  but it is what it is. )  That's what I think of every time I see him showing off for the chickens.  Obviously,  they are not impressed.

Posted by Dianne MacDonald at 3:18 PM