Shearing day for the alpacas and llamas went as near perfect as possible.  The weather was great and everyone behaved admirably.  I penned all my alpaca boys the night before and put Strawberry and Pippi in the big pen with the Easter mom and lambs.  It's always amazing to me how gentle and curious the llamas are with the tiny lambs.  They move slowly and carefully, sniff around some and seem to enjoy watching the lamb antics.  I've mentioned here before that Strawberry has even served as part of the exercise equipment by allowing the babies to climb up on her back (when she's lying down) and jump off.  Pippi is not quite ready for that.  She stands up if the lambs begin climbing on her. 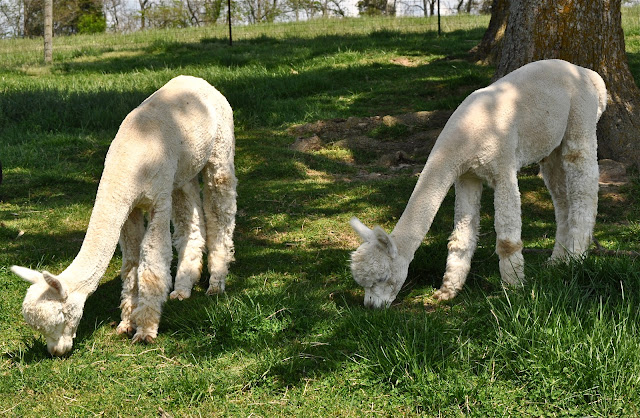 Anyway, as I was saying,  I had no problems.  I loaded Strawberry, Pippi and one of the alpaca boys into the trailer first and the rest loaded themselves.  All I had to do was get in and remove their lead ropes and away we went.  At Lindy's, I was able to back right up to the barn door, put them in a stall and let them be worked through the gates until it was their turn.  The shearers were a study in speed and efficiency, all the while treating the animals with care.  They have a tag-team system where they shear two animals at once, on mats across from each other.  Each shearer has a specific task; one shearing the 'blanket' (that's the prime part of the fleece), others doing head, neck, tail and legs.  They also trimmed feet and I was able to give each animal a shot of Ivomec (de-wormer), all while they were safely restrained.  After seeing how the professionals get the job done, I cannot imagine what it would be like to try shearing an alpaca or llama while they were standing up.

When I went through my camera, I was amazed to see that all I had taken were two short movie clips.  I could have sworn I took more. 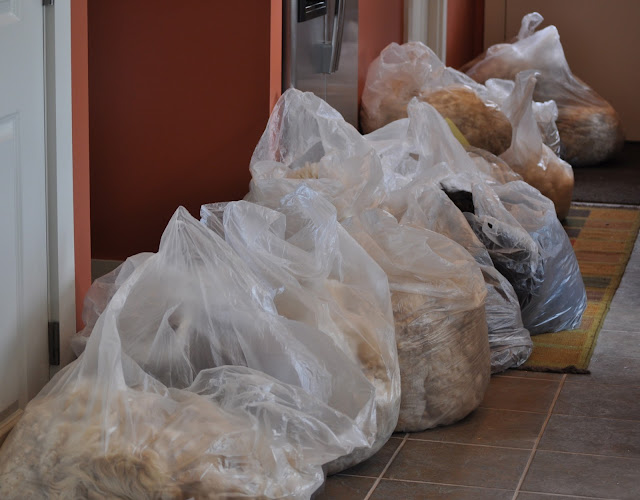 Guess what's next on my to-do list?  Have a great weekend everyone!

Posted by Dianne MacDonald at 3:59 PM