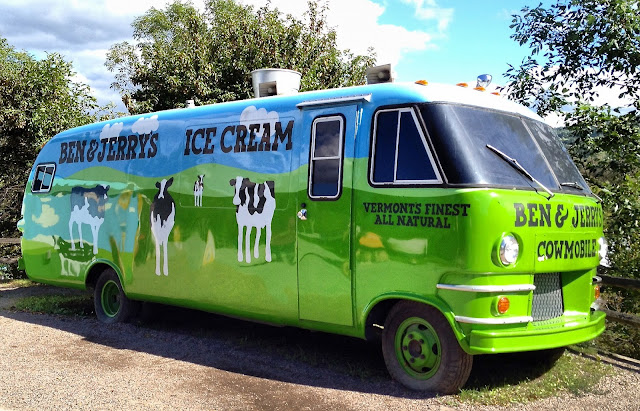 You can't go to New England without visiting Ben & Jerry's, right?  We made the trek while we were still at the lake house.  It was Sunday, so the production line was not moving, but it was interesting, nonetheless.  I'll confess that we all thought the tour guide was a little lame,  but there were lots of other interesting things to see ... such as the Flavor Graveyard.  Very clever.  One of the more unusual things we observed while we were there was a couple having a small wedding reception at the tables outside the ice cream store.  I didn't get to see inside the ice cream bus, but I came away envisioning a sheep-mobile or maybe a wool-mobile (baa-mobile?). 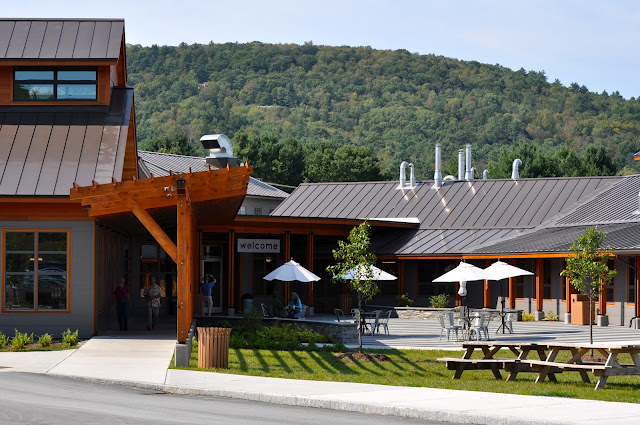 After we left the lake house and hit the road,  we managed to find a few other food related attractions.  King Arthur Flour is a favorite of mine and when I saw we were in their neighborhood,  we just had to check them out.  This is their brand, spanking new store and baking school in Norwich,  Vermont.   It's gorgeous inside and going there for a workshop is now on my wish list.  They have an amazing array of products and,  if not for the fact that my suitcase was already teetering on the brink of a weight penalty zone, I would have loaded up.   Now that I'm home,  I plan to order on line and have it brought to my door. 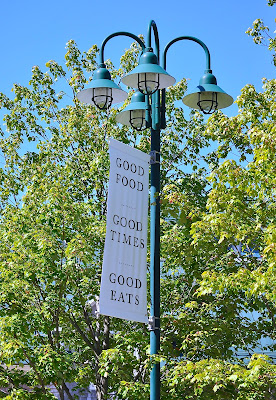 Next up was Stonewall Kitchen,  which was a happy accident.  I'd forgotten that they were a New England company,  until we drove past late one evening.  They were closed then,  but we came back during the daytime to this beautiful store in York, Maine.  The gardens outside were gorgeous and inside was a foodie's idea of heaven!  Unfortunately,  they didn't allow picture taking inside the store,  but take my word for it,  it's a place to go,   if you should find yourself in the vicinity.

They've obviously been in this location for some time because the setting and plantings were lush.  Had we not already eaten,  we could have had lunch under the wisteria draped pergola (it almost made me want to eat again,  just to experience it!). 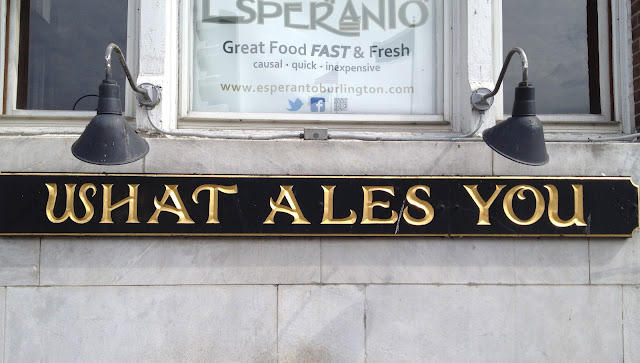 While we were still with Katie, Crimson and Taylor,   we visited a few breweries.  Taylor is becoming quite the brewmaster,  so these held a special interest for him.  I just liked the name of this one,  which was adjacent to the City Hall Park in Burlington,  where we went to the farmer's market on both Saturdays we were there.

Burlington Farmer's Market was a very energetic place.  There was live music and even dancing, around the fountain at the center of the park.  We opted to eat lunch there both Saturdays, sampling lots of things we hadn't ever seen before.  Mike and I had several types of ethic food,  a homemade root beer and homemade ice cream float,  samples of Scotch Highland beef and some wonderful baked desserts. We also came away with beautiful dark amber maple syrup from Dragonfly Sugar Works.  They had little sampling cups to taste the different varieties of syrup they offered and it was hard not to just stand there drinking down maple syrup.

We had so much good food while we were traveling.  We ate seafood at every opportunity (when in Rome and all that) and I wish I could recall the names and places of each restaurant.  (note to self:  keep a travel journal, next time).  On the last night of our trip (which I do remember!), we ate at a charming little restaurant,  Roots,  in downtown Rutland, Vermont.  Are you hungry, yet?

Stopping in Rutland for the night was a bit of an afterthought, but we were so glad we did because it's a lovely little town.  Other favorite towns were Woodstock and Bennington, Vermont and Concord,  New Hampshire.  Really,  I don't think we stopped anywhere that we'd never want to go back to.  My advice, if you're planning a New England trip.......plan on seeing it all!


**I intended to combine yarn and food in this post,  but think it's getting a little lengthy already,  so I'll do the yarn tour next.
Posted by Dianne MacDonald at 3:27 PM