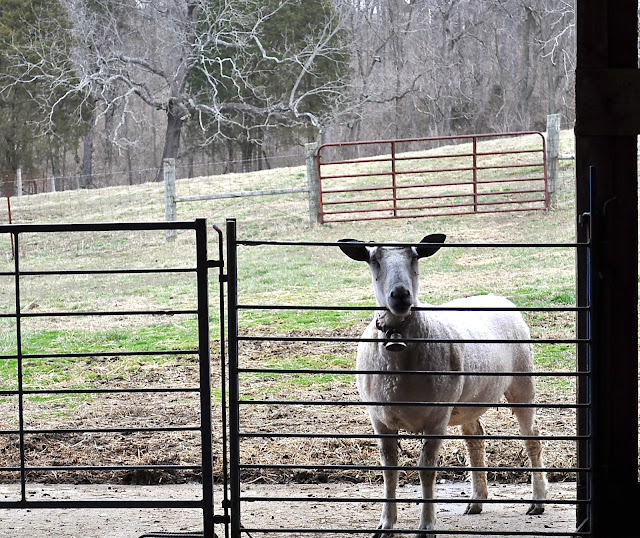 We had a rude awakening this morning to snow on the ground.  Where it came from, I have no idea.  I didn't watch the weather last night (which is unusual for me), but instead got straight into bed with a new copy of British Country Living magazine and drifted off to sleep soon afterwards.  The poor naked sheep are wondering if the end of the world is nigh.  It was 70 degrees on Sunday when they were shorn and there was quite a lot of frolicking about.  Today I think they are doing laps around the pasture to try to stay warm!  It actually isn't that cold, in fact, the snow is already melted away, but the wind is unpleasant and makes it feel much colder than it really is.  The younger girls have been out and about and the older ones are content to stay in the deep bedded straw inside the barn and bellow for more hay every time they see me.  I've heard that warmer temps are on the way and I hope green grass is not far behind. 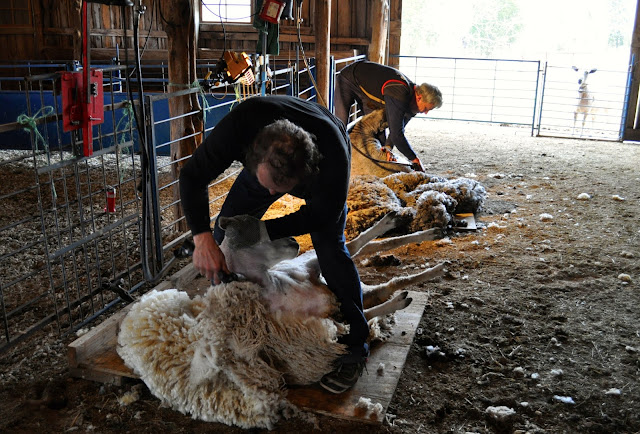 Shearing went off without a hitch.  Bill Haudenschield and Gavin McKerrow were here on Sunday morning, bright and early and by 2:00 o'clock we were all done and they were on their way to their next stop.  Well, we were not completely done because I still had some fleeces to skirt and the barn to clean up.  I finally got to the house just as it was getting dark.  It's a wonderful feeling to have that task behind me for the year.  I was totally worn out and was still dragging some on Monday.  Hmmm, wonder if that's another sign I'm getting too old for this stuff? 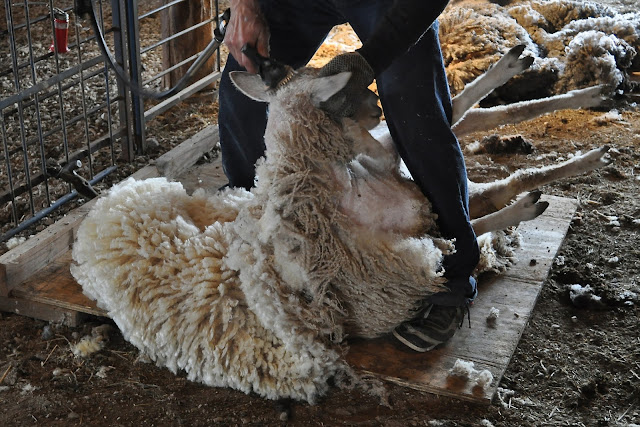 Shearing did not reveal all I had hoped for in the way of lambs we could be expecting soon.  It appears that Mr. Bates didn't quite get the job done.  Several girls don't appear to be pregnant and the ones that probably are seem to be lagging behind schedule.  I knew there was some risk of this because Mr. Bates was on the young side, but since I was only exposing six ewes to him, I thought he'd be able to manage it.  Anyway, it will happen the way it's meant to happen, so I'm trying not to be too disappointed.  Given the situation with my shoulder, less is probably better this year. 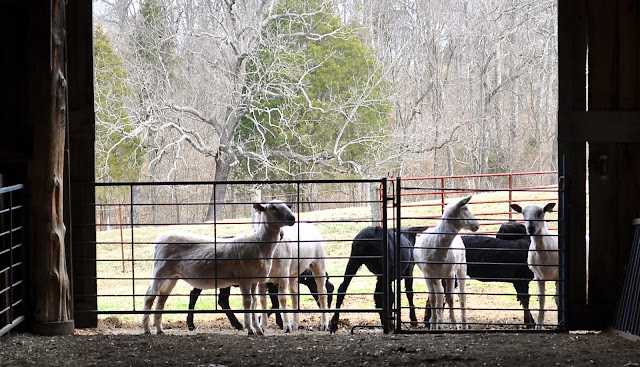 Shearing did reveal some pretty nice fleeces.  Overall, I'm quite happy with the quality of the fleeces and the body condition of the sheep who grew them.  I'm especially pleased with the fleeces from the ten ewe lambs I kept from last spring - the ones that are half Wensleydale.  There are some beautiful, long, lustrous fleeces in the bunch and as soon as I can get a little time, I'll put up some photos (and maybe even do a little washing and sampling myself).
Posted by Dianne MacDonald at 2:48 PM