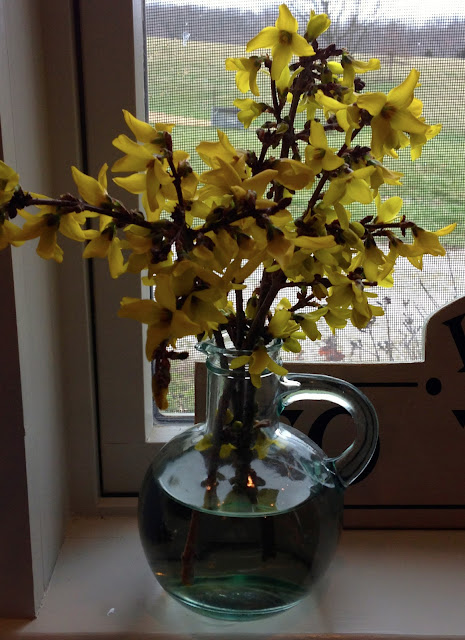 This picture is inside the studio, which is the only place the forsythia is blooming.  I brought a few branches in a week ago and the buds opened up to present me with some springtime hope.  I'm hanging on here and need all the hope I can get.  I'm telling you, this weather is wearing me completely out!

Outside, it's been looking like this.  We're running about 25-30 degrees below normal for this time of  year and have had lots of snow coming down. We've had snow on the ground most mornings, but then it's gone by noon and meanwhile we've had snow showers all during the day.  The sheep are not amused by this (and neither am I) because they are (un)dressed for warmer weather now.  Because I thought we were expecting lambs, I wanted the sheep shorn early.  Instead it's looking very doubtful that we are having any lambs this year.  I cannot even explain how sad this makes me.  Even though I had only exposed 6 ewes and wasn't expecting the normal big bunch of lambs, it just doesn't feel right to have none.  I don't think, in all my years of being a shepherd, I've ever not had lambs when I wanted to have them.  Mr. Bates seems to have let me down.  I'm not sure what we're going to do about him now.  The plans were to castrate him as soon as shearing was over, so that eventually I could run the whole flock together in one field.  Now, I don't know whether to keep him intact and try him again in the fall or look for another ram.  One of the things I like to tell new shepherds is to expect that if you are keeping sheep for a long enough period of time, eventually everything will happen to you.  This is one more of those things.

So, a little note here about the dye workshop.  It filled immediately and I've already received payment from all but two people.  There is a waiting list and I'm happy to add anyone to it, but it's looking as though we are set for this go-round.  This might be something I would consider hosting again at a later date (if Dagmar were up to it).  There are also some other workshops I would love to host here at the farm.  I'm going to think about that after this one is behind me. Thanks so much for the response to this first endeavor

Now for something fun.  As anyone who read this blog knows, I am a big fan of Kristin Nicholas.  Her bold and brave color sense is truly amazing (and she's a fellow shepherd!). Kristin has a brand new book out titled " 50 Sunflowers to Knit, Crochet and Felt" and I'm going to be offering an autographed copy (that would be personally autographed by Kristin - not me!) to the lucky winner.  Plus, I've added a little something to sweeten the pot.  Check back here before the weekend for all the details.
Posted by Dianne MacDonald at 12:07 AM