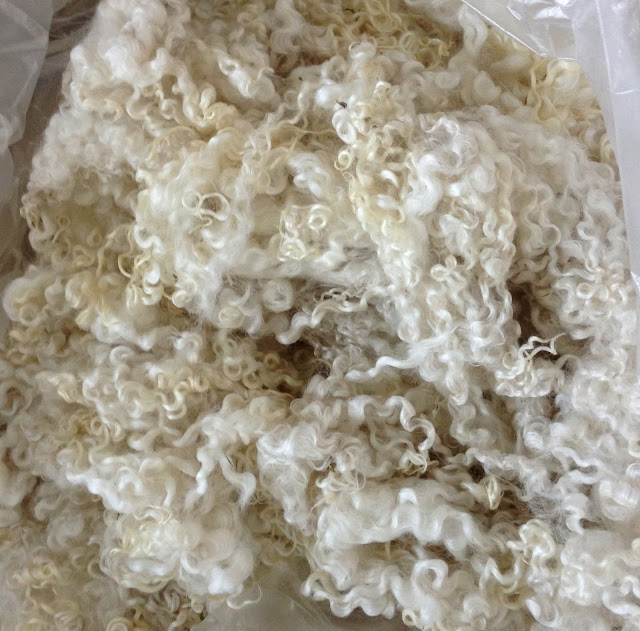 and so is Tuesday, Wednesday, Thursday, Friday, Saturday and even Sunday right now.  I'm in the throes of washing fleeces in preparation for taking this year's clip to the mill for spinning into our 2013 Sheep Dreams yarn.  I've been washing non-stop for days now and still have a pile more to do.  The greenhouse has been a wonderful drying facility - no more fleeces on old window screens or in the hammock or scattered about on the floor in the studio and house.  Fleeces dry quickly in the greenhouse, even without the sun, which is a good thing because we have had day after day of rain lately.  Finally, yesterday the clouds parted and the sun came out.  Today we've had sun all day and it has shown me just how much weeding there is waiting for me in the garden.  :-(

Our weekend was lovely.  Baby Atticus paid his very first visit to the farm and was on his best behavior.  Taylor, Crimson and Atticus came down from northern Kentucky on Saturday and spent the night with us, so we had a nice long visit with lots of cuddle time.  We discovered that Atticus loves to be outside, especially when we would spend time sitting on the porch swing with him.  Of course,  that's all the excuse we needed to give up on the chores and spending some time swinging.

So, what else happened this weekend?  After years and years of owning a Night-blooming Cereus, we "accidentally" witnessed the blooms opening.  It has bloomed a few times before this year, but it always seemed to happen in our absence.  I was heading to the barn to close the chickens in on Friday evening, just at sundown and noticed the buds looking awfully plump.  A few hours later,  it was obvious that the blooms were going to opening.  Mike and I both were thrilled to finally see what all the fuss is about.  Mike remembers his grandparents staying up late and inviting people over to see the blooms open and I've heard of people having parties for that purpose.  Obviously, we're not quite organized enough to have a party, but at least I can share by way of pictures! (and, apologize for the bad iPhone pictures.  I've gotten very lazy about taking pictures lately and I know I need to get the "real" camera out and start working on getting better.)

So, it's back to washing fleeces and planning for this year's edition of "Fresh from the Farm Yarn".  I'm thinking worsted weight, but maybe with some special additions to the mix that will make it different from last year's version.  What's your favorite weight and fiber blend?

Posted by Dianne MacDonald at 5:46 PM