We are getting lots and lots of rain here in central Kentucky.  We're in a pattern of hot days and late afternoon or nighttime thunderstorms.  It's been really good for my late planted garden (and apparently even better for the weeds that I cannot seem to stay ahead of).  The sheep are not exactly oblivious,  more like resigned.   They pick a shady spot when the sun is out and save their energy for grazing when the clouds show up or the sun goes down.  That makes them smarter than me because I keep finding myself out weeding in the garden during the heat of the day.  My garden is later than usual this year.  May was busy and I was disorganized and blah, blah, blah ..... truth is, I'm always disorganized and nearly always later than everyone else getting my garden out, but whatever .... 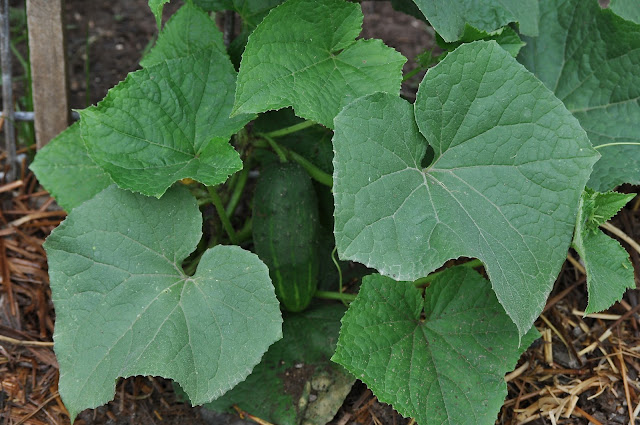 Finally the garden is starting to look like a garden.  We've been in a barren spell since the lettuce and asparagus finished producing, but the next crops are coming along.  We would have been enjoying a few other vegetables, but Mr. Dandy "worked" on the garden before he moved to his new home.  :-( I found my first cucumber this morning and it will definitely be part of my lunch today.  I love cucumbers and I have very mixed luck growing them.  The dreaded squash bugs are my mortal enemies!  So far, no sign of them, but I'm sure they're lurking around, waiting for me to feel secure before they show up to humble me once again.  I've been reading that row covers might be a way to prevent the infestation, so that's on my to-do list, if it's not too late.

I'm trying to get motivated to take part in the Tour de Fleece again this year.  I can't decide on a project, probably because I have so many already started that I should work on instead.  I'd love to spin Olive's fleece for a good, everyday sweater.  After seeing this Soulemama post, I'm thinking I'd really like to knit Antler with some Olive yarn.  It's a style I know I'd wear a lot and having it as a reminder of Olive would make it even more special.  So .... what are your plans for the Tour de Fleece?  Are you taking part and do you have something specific in mind for the yarn you spin?
Posted by Dianne MacDonald at 1:17 PM