Well, my plan to blog every few days hasn't exactly worked out.  We seem to have chosen places with the worst Internet service possible.  (It's almost like being at home, where our service is less than dependable.)  We've stayed in lots of inns and bed and breakfasts, who all say they have wifi, yet we have been unable to use it for more than a few minutes.  I've done a few Instagrams,  using my phone (and I'll be afraid to look at the data roaming charges when the bill comes!)

We've dubbed this trip our second honeymoon because we had talked about coming to Scotland for our first honeymoon.  We didn't get around to planning it then, so here we are celebrating our 16th anniversary (September 5th).  I say better late than never.  There have been some similarities between our original honeymoon in the Northwest because Mike is the kind of traveler who wants to cram as much as he possibly can into the available time.  On that trip we drove about 3000 miles in two weeks (and that was after we flew out there). I really like to go somewhere and just relax, rest, read and knit.  We've already driven some 1200 miles and still have several days to go.  Good thing I can knit in the car.

Our days in Ireland with Nicola Brown went by much too quickly.  We visited with Suzanna and the lovely Zwartbles,  the Cushendale Woollen Mill, in the town of Craig-na-Managh, and a beach on the Irish sea.  The weather was comfortably cool and Nicola fed us well.  She even prepared lamb for us that we really enjoyed!  (we are not lamb eaters, so this surprised both of us!)

On Friday we flew from Dublin to Edinburgh and drove up to Inverness for our first night.  On Saturday we visited Culloden, the site of the battle that broke the spirit of the Rising of 1745 and many, many Scottish men died at the hands of English soldiers.  Because of reading Diana Gabaldon's Outlander series, I have been particularly interested in visiting the battlefield.  I expected to feel somewhat as I did on visiting the battlefield at Gettysburg, but there were so many people around and so much activity, I didn't feel that aura that I experienced at the site of the Gettysburg battle.  It was sobering to think about the events that took place there and how it affected Highland families for years to come.  We walked around the battlefield until we found the marker stone for the Clan MacDonald.  Each clan who fought there has a stone marking the spot where their men were supposedly buried.  The day we visited there was a special homecoming celebration and there were bagpipes being played at the entrance and musicians playing Scottish music elsewhere.  Ironically, the Hellcats from West Point Military Academy played while we were there.  Not exactly sure what that was about! 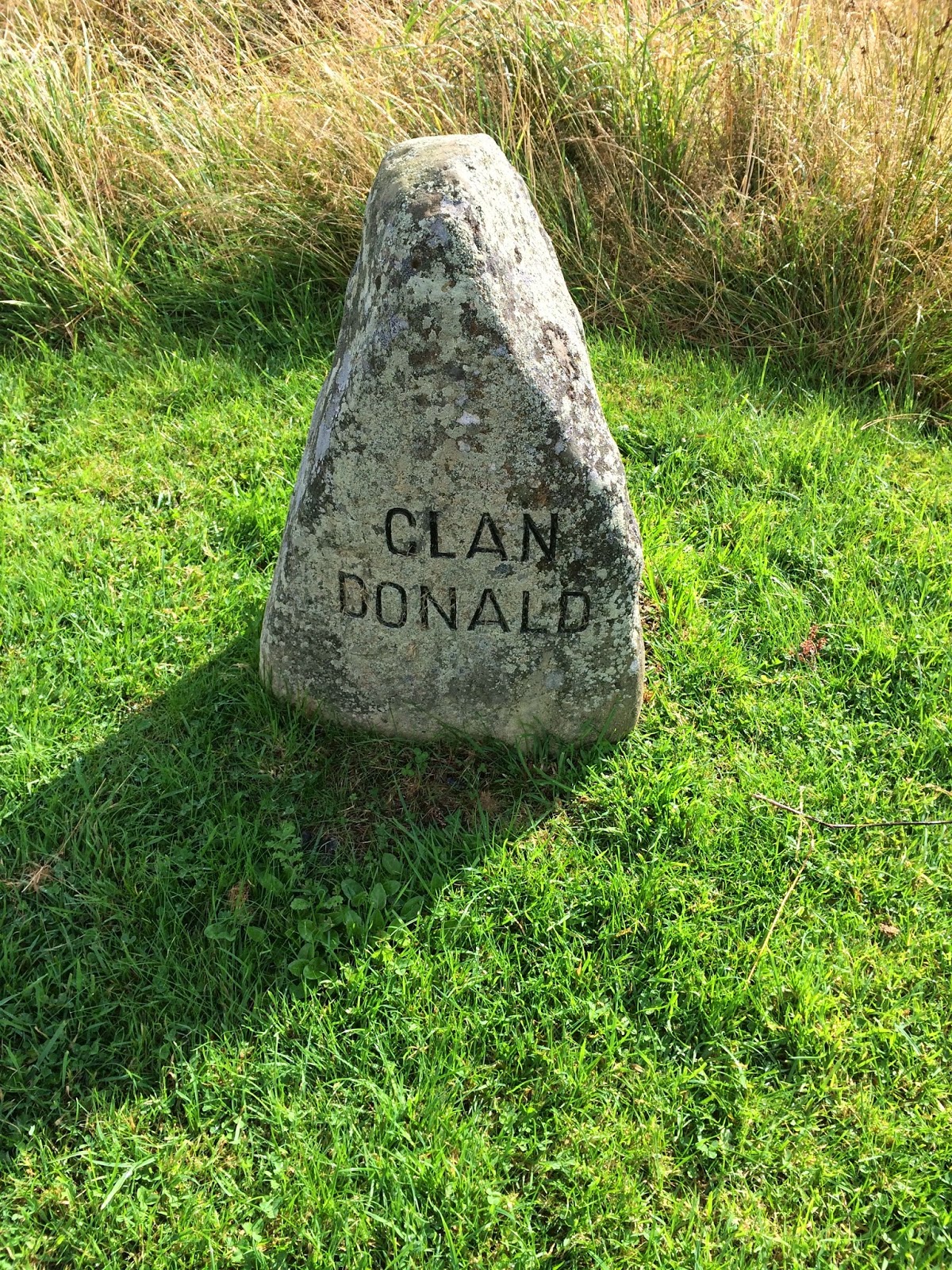 This little guy (girl?) went right on by us, as if we were invisible.  I guess they are used to having cars get in their way. 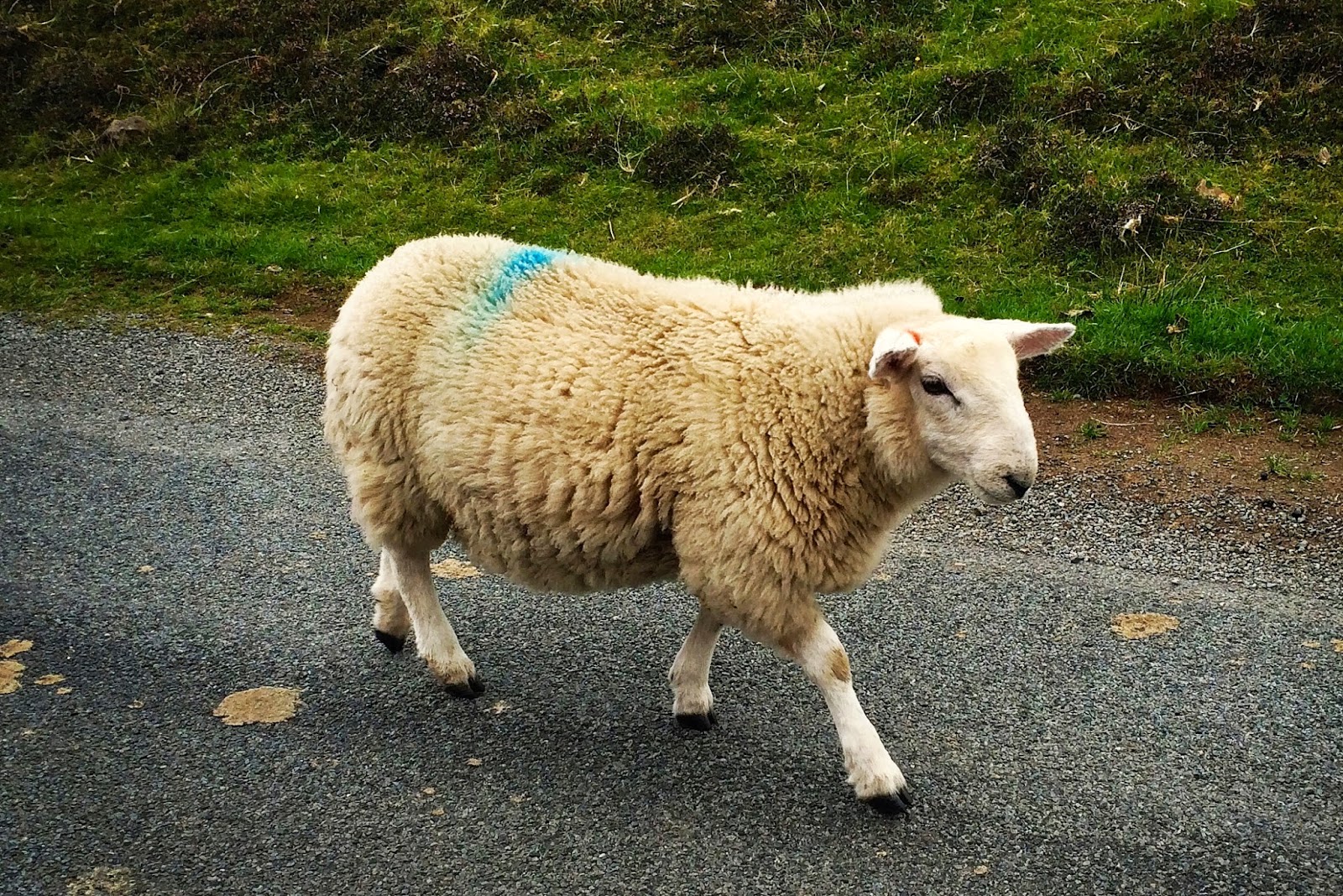 Mainly, we've been seeing Scottish Blackface sheep and those perpetually surprised looking Cheviots.  This one looks to be a crossbred.  There are sheep all over the place here - literally everywhere and they are fat and happy looking, grazing amongst the gorse and heather.

While we were on the Isle of Skye, we went to the castle of Clan Donald.  Even though the castle itself is a ruin, it is pretty impressive.  It's certainly a far cry from our own humble abode!


The owner of our bed and breakfast is a knitter and she recommended a local yarn shop, so we checked it out before we left the island.  The Skye Shilasdair Shop is a small, but beautiful little shop specializing in yarns from local sheep and naturally dyed (on the premises) yarn.  Needless to say, I didn't leave empty-handed.  In fact, some of my knitting in the car has been a couple of hats made from yarn purchased there. 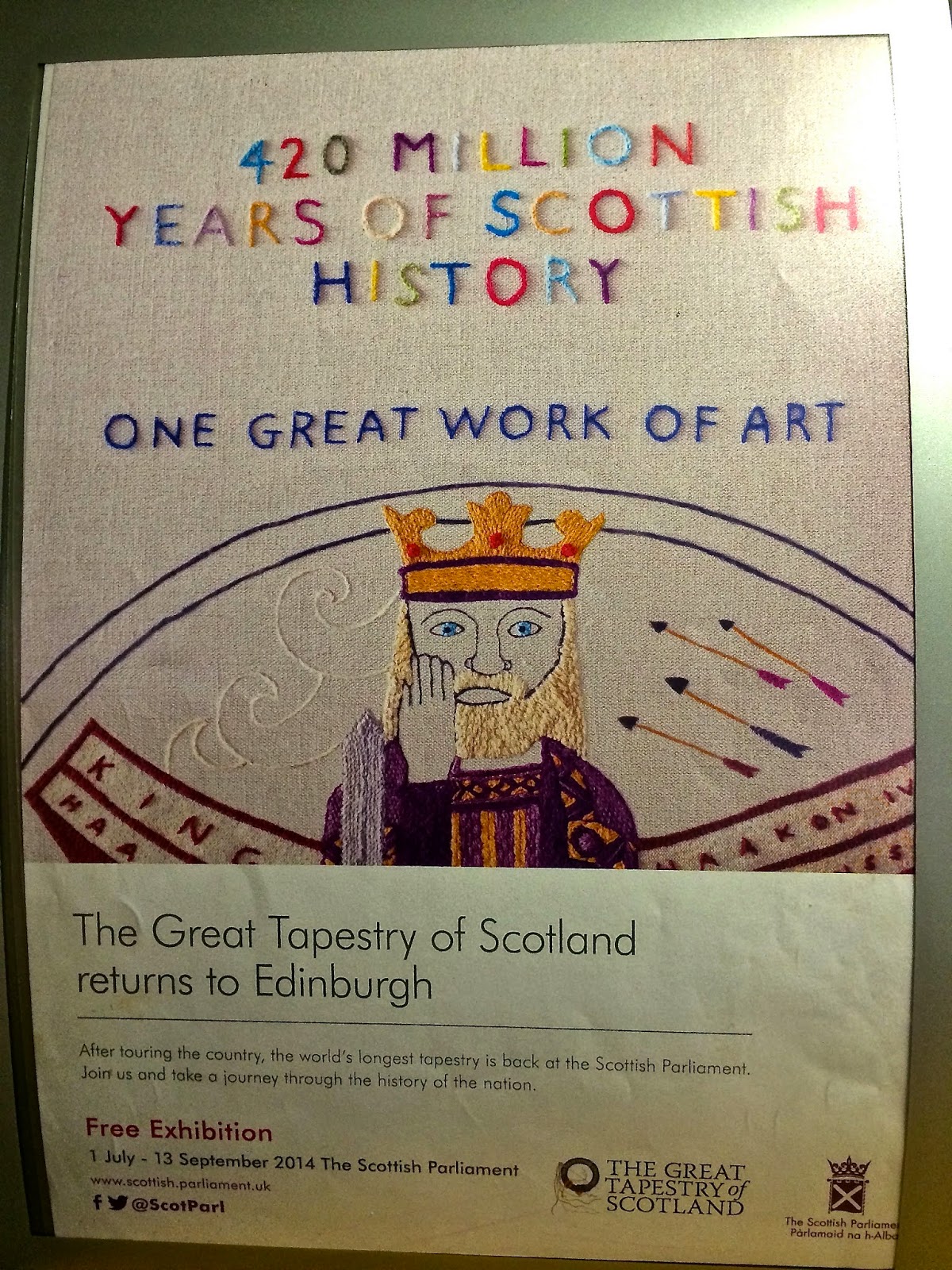 We took the car ferry from the Isle of Skye back to the mainland and drove to Oban for the night.  The next day we drove into Edinburgh to see the Great Tapestry of Scotland, which was on display at the Scottish Parliament building.  I can't even describe how impressive it was.  It isn't a woven tapestry, but rather panels that have been embroidered by many loving hands, each depicting a scene from the history of Scotland.  Naturally, I was most drawn to the ones about the Rising of 1745 and any depicting fiber and textile activities. 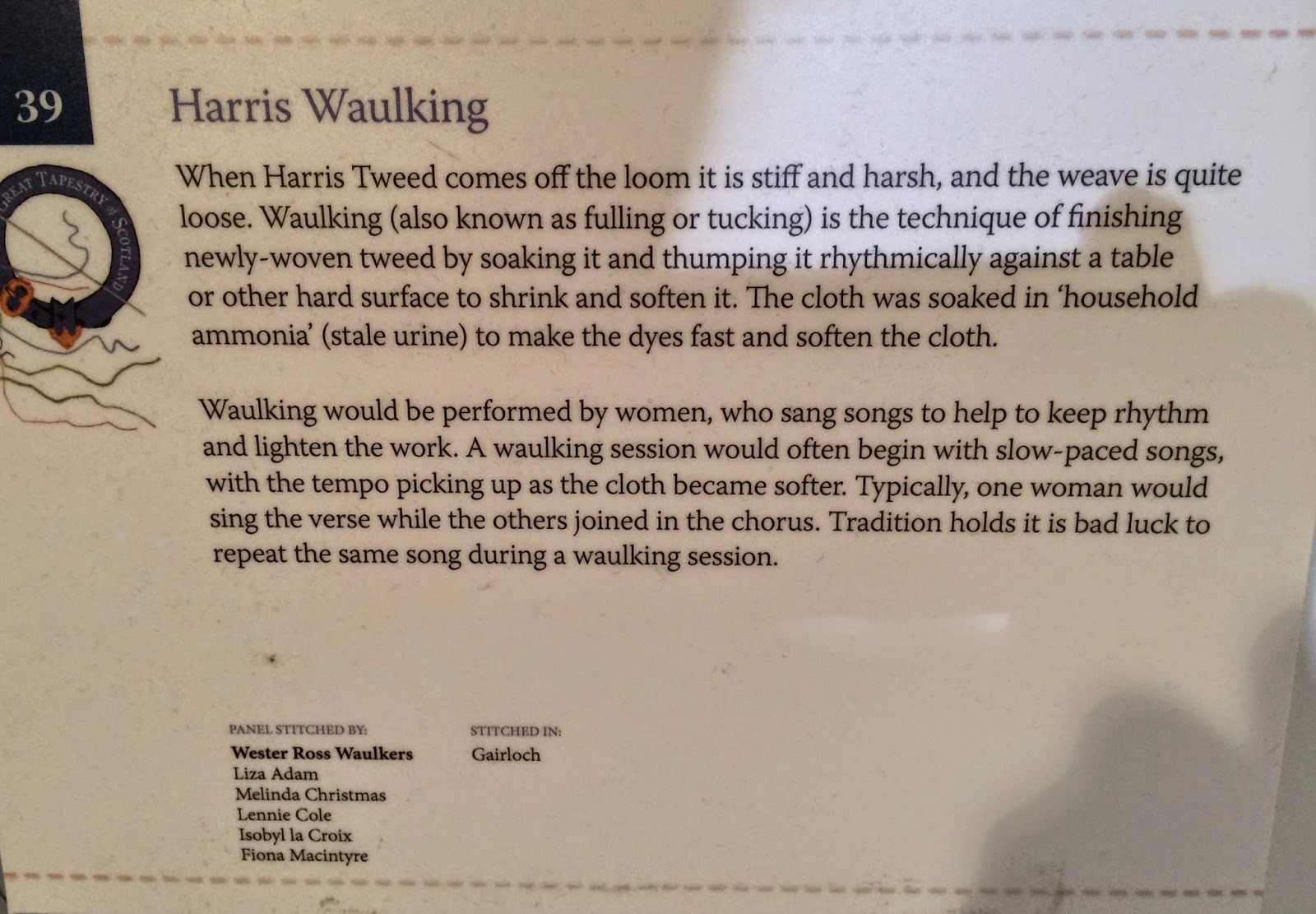 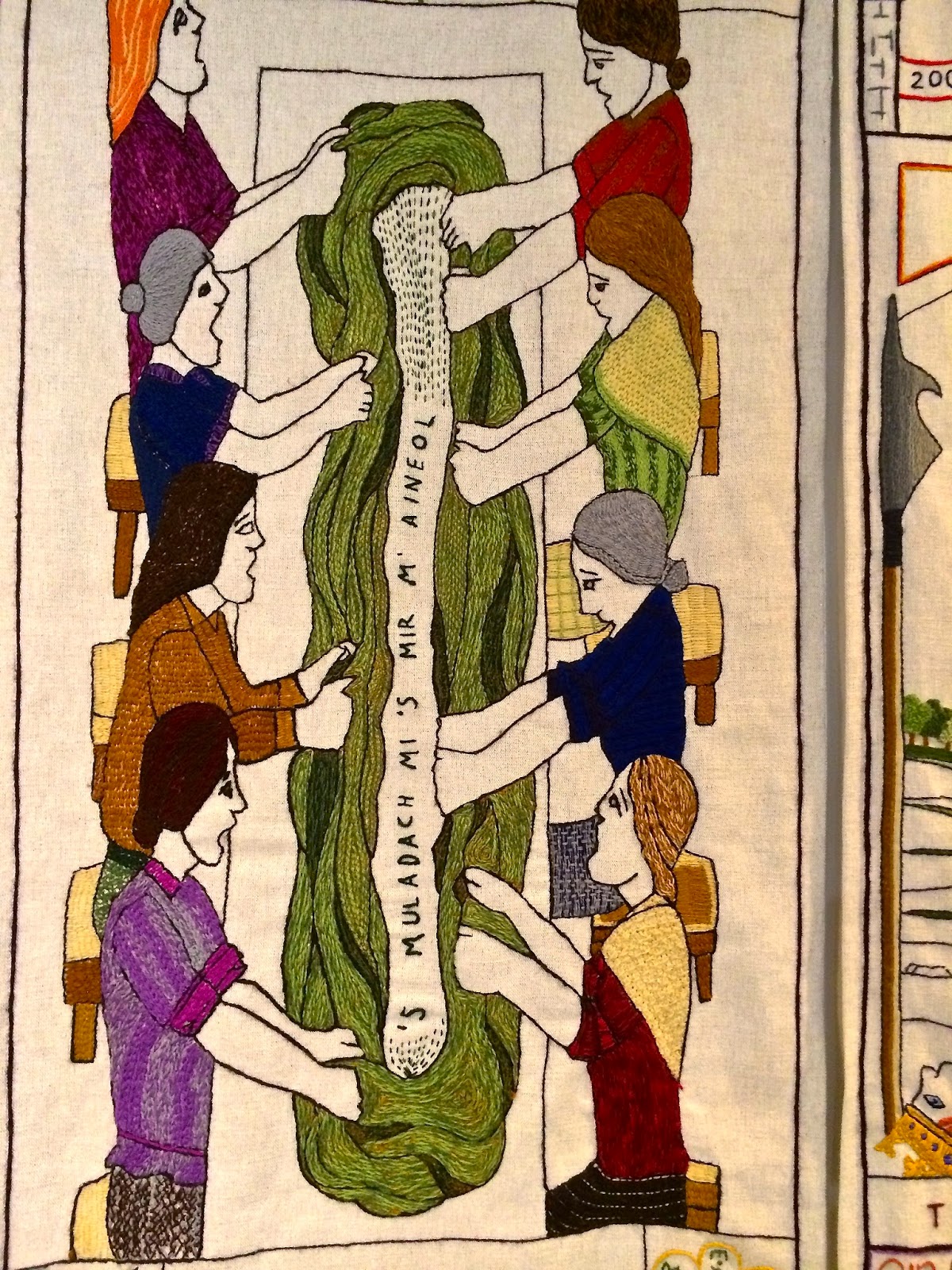 So, that's it for this installment.  Our time here is running out, but we are on the move again.   I have more pictures to show in the next post.  Until next time .......

Posted by Dianne MacDonald at 4:26 PM