We are home now, but I still have so much to tell about our trip to Scotland and beyond.  It was the trip of a lifetime in so many ways, but we are hoping it turns out to be merely a scouting trip for many trips in our future.  We visited Inverness, the Isle of Skye, Edinburgh, Oban, Aberdeen and Stirling. We didn't quite make it to Glasgow, but that's on the wish list for next time, as are many other places.  Before that we were in Ireland and somewhere in between some of those Scottish cities, we went to the Lake District in England and then to York, England (which was so interesting we wished we had allowed more time for it.)

We learned so much on this trip.  Fresh off the plane in Dublin, we were a bit nervous about the driving situation.  Nearly all cars are standards, meaning you have to shift gears. To lease an automatic is nearly four times the amount of leasing a standard.  I drove standard cars for many, many years until we bought my current Subaru.  Mike hadn't driven a standard shift in years, nor had he ever driven on the left side of the road.  Coming out of the airport was somewhat harrowing because we were into heavy traffic and lots of round-abouts immediately.  Then before we reached Nicola's house, we were on some tiny roads with tall hedgerows on each side and barely enough room to pass another small oncoming car without scrapping the side view mirrors off.  Mike became a pro pretty quickly.  He did an amazing job of getting us around without any mishaps.  Believe me when I say we were all around Scotland and a little of Ireland and England, too.  By the end, we'd driven about 2000 miles.  All I can say is thank goodness for Siri on our iPhones giving us directions!  We would have had a lot more trouble negotiating all those round-abouts without her voice telling us which was the appropriate exit.  (All those "we's" are actually what we call the "Royal We".  Mike did all the driving.  I was merely moral support!)

We visited lots of castles (and castle ruins) and cathedrals, which beforehand was exactly what we'd proclaimed we were not going to do.  Once we were there, we just couldn't help ourselves.  There is so much history everywhere it is mind boggling.  It did occur to me pretty quickly that America is a baby in terms of how much history we have.  We spent our last morning touring Stirling Castle and found it just as fascinating as the castles we'd visited earlier. While I don't pretend to know much about Scottish history, I do find it really interesting.  Obviously, with a name like MacDonald, Mike has very clear ties to Scotland.  I know that my own family has Scotch-Irish and English roots, but know only a little about the particulars and now am motivated to find out more.

We stayed in a lot of bed and breakfasts and found all of them to be quite nice.  You really don't find chain hotels like we have here in the States,  nor do you find chain fast-food restaurants.  A pleasant change, if I do say so. (We'd read somewhere that Rick Steves recommends staying at B and B's in order to get to know local people.)  Everywhere we went in Scotland,  people were friendly and kind and seemed more than willing to help with directions and advice.  We stayed at a lovely B and B on the Isle of Skye and met a family from Germany, who were also staying there.  We really enjoyed talking with them two mornings over breakfast and wished we'd had more time to get to know them.  I think one thing that was pleasantly surprising to both of us was how comfortable we felt.  We expected to have difficulty understanding people and finding our way around, but honestly it was much easier than we anticipated.  Mike was often outside his comfort zone because our trip was so loosely planned.  We had no reservations anywhere when we began the trip and spent some time each day consulting Tripadvisor to find our next place to stay.  I wouldn't necessarily recommend this method, but it was mostly successful for us.  Next time we'll do more pre-planning because we know enough now about where we might want to go.  Mike has promised me that next time we will stay in one place for at least 3 or 4 nights in a row, rather than someplace different nearly every night.  You are my witnesses! 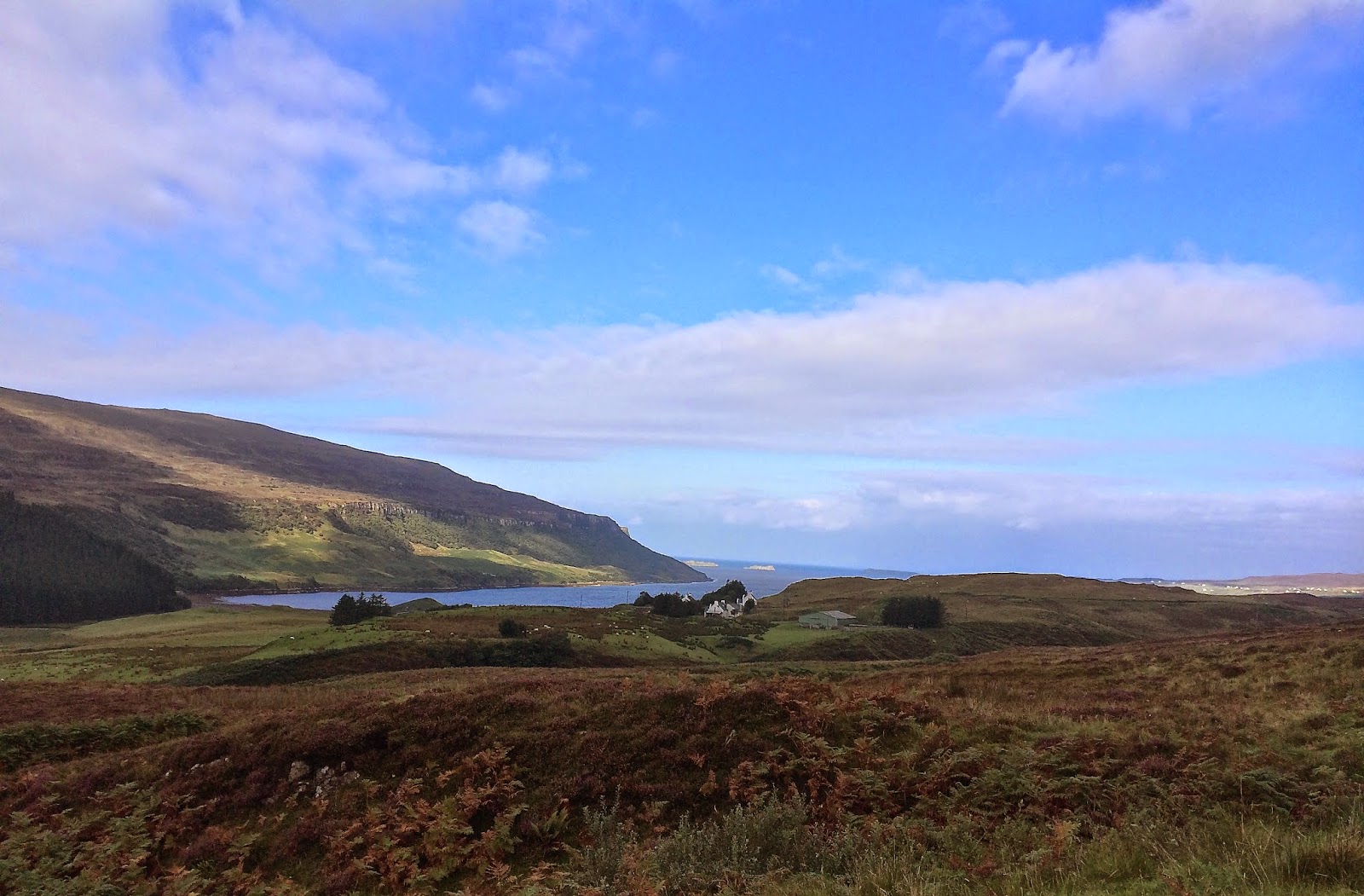 I have too many pictures of castles and don't want to be a bore about it.  So, I will just say Edinburgh Castle, Holyrood Palace, Stirling Castle, Dunvegan Castle and many others are well worth visiting.  Just don't spend all your time touring the inside of castles.  The scenery out of doors is too beautiful to miss.  Mike has been watching the Outlander series on television with me and after we returned from Scotland, he admitted that before our trip he'd thought they had made up the outdoor scenery for the program!  It really is as dramatic and beautiful as the pictures you see.

Next up:  a quick trip to the Lake District of England to see the home of a favorite of mine.  Meanwhile, here are a few more livestock on the road pictures, all taken on the Isle of Skye. 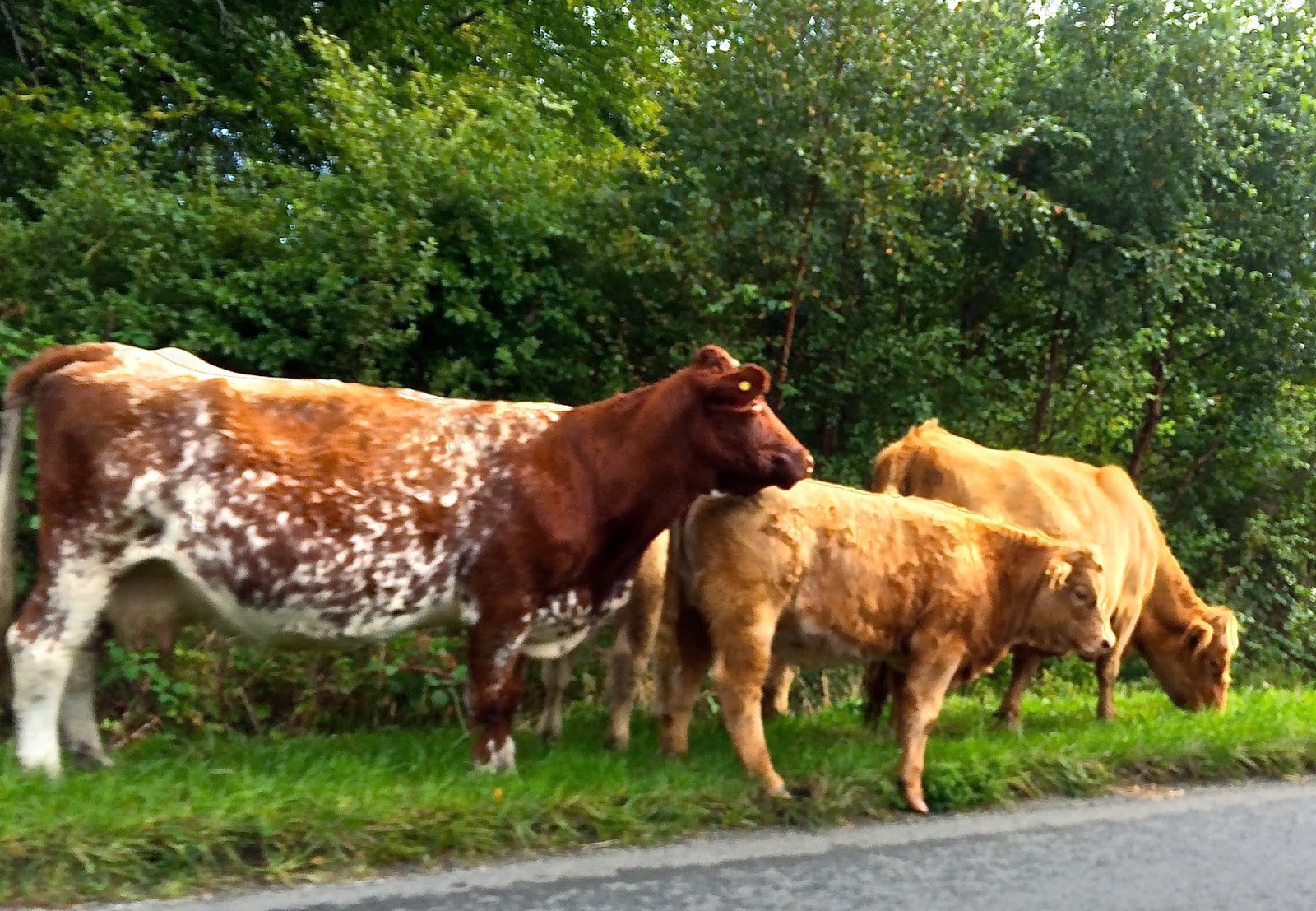 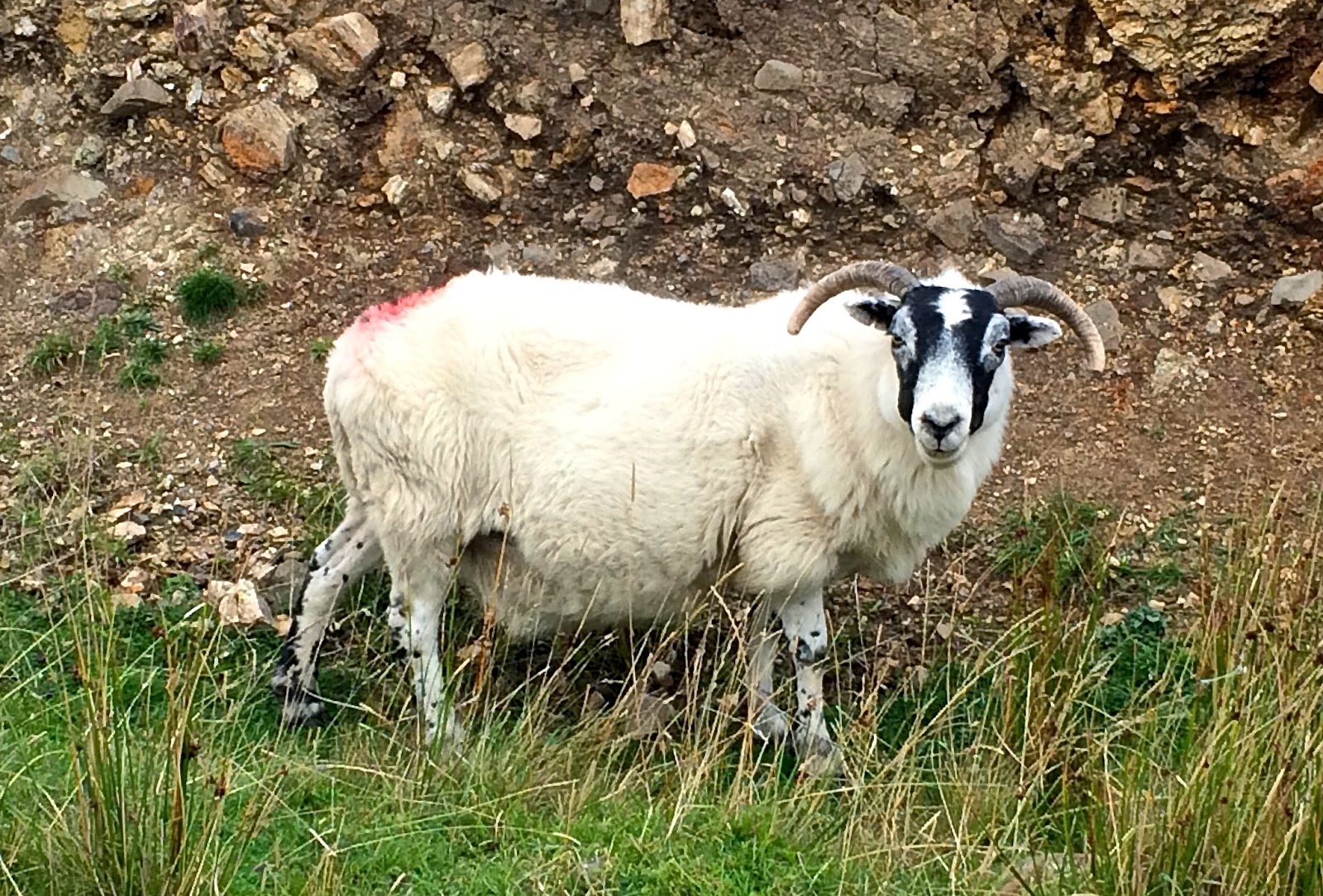 Posted by Dianne MacDonald at 4:55 PM