We've had the drabbest, wettest, foggiest kind of days this week.  I don't mind it so much when I can stay home and have a cozy fire in my little studio woodstove.  Because I have fewer numbers in the sheep flock, I can satisfy my need to bring everyone into the barn whenever I feel like it, which makes them happy and me, too.  No sloshing around out in the fields, spreading hay for sheep who would much rather be hanging out inside the barn, eating their hay from the hay racks. 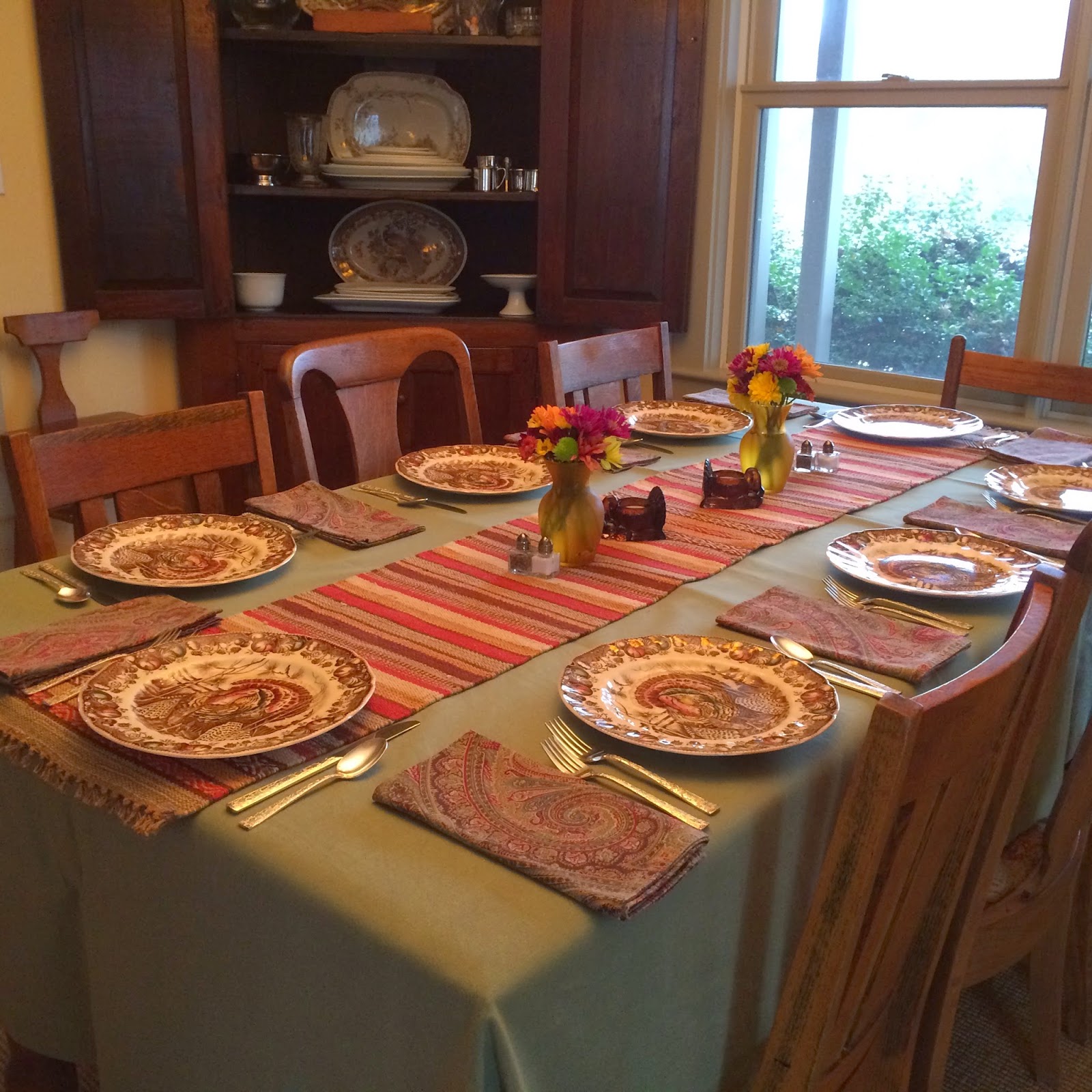 Thanksgiving was quite the stromash (ah, can't help but let a little Outlander slip into my speech when I have the chance!) We ended up with 20 folks around the tables. There are not so many littles anymore. Atticus is 19 months and Parker is 5 years old.  Mia is next youngest at 10 and after that it was all teenage boys (the two older girls were absent this year). I'm reminded every year of how fortunate I am to have most of my family close at hand and that they are willing to spend time here at the farm. The energy is quite different now that most of the grandchildren are getting older.  There are no worries about little boys being upstairs jumping on the beds or moving the clawfoot bathtub around! (That clawfoot bathtub business is true. A game of hide-and-seek caused the tub to get scooted just a wee bit and next thing we knew water was dripping out of the ceiling downstairs!)

The Thanksgiving decorative (not the eating kind) turkeys have all gone back into their storage places, but very little in the way of Christmas decorations has made it out.  I'm feeling a little ambivalent about the whole thing in this in-between time.  I have put up a tiny tree in my studio with some of the wool felt ornaments I've collected over the years and am almost wishing I could do something similar in the house.  Oh well, some kind of a tree will appear in the house this weekend.  I'm not quite into the bah-humbug category, just feeling the need for simple this time around. There was a time in my life when decorating for Christmas took on epic proportions. Every room in the house had Christmas baubles. That was mostly when my boys were small and it appears that I'm over that now.  All I want are the most simple and natural decorations, with a minimum of glitter and gaudy.  My friend, Teresa, says if you can't be tacky at Christmas, whenever can you be, but I've somehow slipped into a quieter frame of mind in recent years.

Not so much going on in the knitting department either.  Still working on the Hitchhiker, though it suffered a setback when I discovered a mistake many rows down and my attempts at fixing it didn't work out well.  I ripped back at least 5 inches and that caused some minor discouragement and a time-out for the scarf.  I'm back to it now after knitting a few hats and finishing a set of fingerless mitts. My knitting ADD has reached embarrassing numbers and I'm feeling the need to frog and donate some yarn.  It has come to my attention that no matter how long I live, it is very unlikely that I will knit up all the yarn in my stash. Only if the dreaded world-wide shortage of wool happens will anyone consider that I have been wise to assemble this much yarn in one place. I am embarking on a major cleanout and donate. This mindset could have been triggered by the decision to move my dye room to my storage room in the barn. Cleaning out the storage room (that's a euphemism for the let's-just-dump-it-here-room) is an exercise that can only be described as painful. At this point, if it were legal and all the animals were safely outside, I'd be quite happy for the barn to burn down!  Problem solved. I recently read a book about tidying and organizing your stuff and the advice was to hold every item in your hand and ask yourself if it gives you joy.  Well, all I can say is I'm wishing I had a lot less stuff right now because not much of it feels like joy!

So, onward into the weekend and with Christmas approaching fast, I hope we all can find some peace and joy in the days ahead.

Posted by Dianne MacDonald at 4:27 PM