A time for finishing 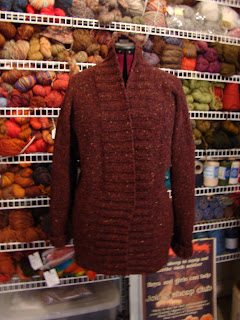 I'm still trying to clean up after more than a year and a half of start-itis. I think I must have knitting attention deficient disorder. During my time as a yarn store owner, it occurred in epic proportions. I just couldn't seem to help myself. Whenever a new shipment of yarn, patterns or books would arrive, I would be gripped with an overwhelming urge to cast on---and I usually gave in to temptation. I did manage to finish a lot of things, but I have way too many still on the needles. If I wasn't such a realist, I would declare a moratorium on new projects til everything in the works is finished. I'm pretty sure it wouldn't work and there's no sense in setting myself up to fail-----is there?
Here is a sweater I started last fall, got to the point of being just a few hours worth of knitting from finishing and then, in my fickleness, put it down and worked on several other things. Last week, I finally got back to it and was amazed at how quickly I finished. I love this sweater. This is my second version. First time, I used Rowan Felted Tweed with a strand of Kid Silk Haze run together (what's not to love about those two yarns?). This time I used Jo Sharp Silkroad Tweed Aran. The pattern is "Lara" from Debbie Bliss' Alpaca Silk pattern book. It's a fun and entertaining knit, begun at one cuff and knit sideways across to the other cuff, with some unusual stuff happening in the middle. The first version was used as a shop sample for many months and was so popular there are countless examples in many different yarns around town now. I'm actually planning on knitting it again, this time with handspun yarn. That's the thing, now that I'm no longer exposed to commercial yarn on a daily basis. I really want to knit with my own handspun again. Which is a good thing because my handspun stash is considerable (remember the "wall of wool"?).
Posted by Dianne MacDonald at 2:30 PM