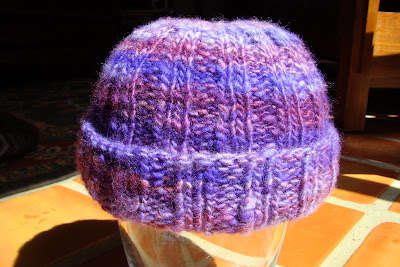 I love that little phase at the top of Susan Anderson's blog. Yesterday during our Wednesday knitting group, we all said it at least once in the course of the afternoon's conversation. It's so true. All of us admitted to wanting to abandon all the "have-to" things on our to-do lists and just sit somewhere and knit. And we all look forward to this knitting group now, as not just a social time, but one in which we can knit (guilt-free) the whole time without anyone needing something from us or feeling as though we should get up and get some work done! I think about it when I wake up in the morning....when can I squeeze in some knitting time? All day long, I am thinking about when I can take some time to knit a few rows. One of us is going on a six hour road trip soon and she can't wait to get in the car, so she can knit the whole time. And the rest of us are so envious! What is it that makes it so appealing? For me, I think, a lot of the satisfaction comes from the creative process. But that said, on a daily basis, it is the meditative aspect that appeals to me most. My husband says he thinks I have become a wee bit obsessive about knitting (okay, he didn't say "wee bit"---just the obsessive part). My answer is that there are so many worse things to be obsessive about, he should be happy I've settled on knitting!
When I was teaching knitting, primarily the beginning sock class, as the students were struggling along with that first little sock, I would tell them that very soon they would enjoy knitting socks so much they would be carrying sock knitting in the car and hoping to get as many red lights as possible, just so they could knit a few stitches while they waited for it to turn green! And I loved it when they would return some time later and admit that they now had stoplight knitting in their cars. Just think how much more patient we would all be with each other, if we only had a little stoplight knitting to help us!
Anyway, that little hat above was my most recent stoplight knitting. It's a prototype for a simple hat kit with some bulky yarn I've been spinning and dyeing. I'm having fun coming up with plenty of bright colors and a super easy pattern for some instant gratification knitting. So, do you have stoplight knitting?
Posted by Dianne MacDonald at 12:30 PM