If three's a crowd, what's this? 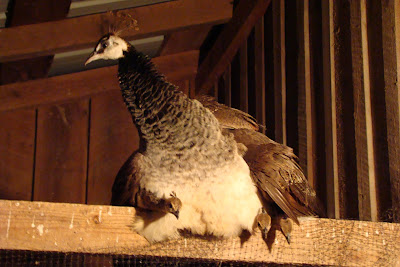 This is some kind of peafowl pile-up! Last night I went to the barn around 10 pm, to make sure the door to the chicken pen had been fastened and this is what I saw. Of course, I didn't have a camera with me and I was too tired to think about coming back to the house, then back to the barn in hopes of getting the picture. I did remember to take the camera tonight. Poor Mrs. Dandy. She's been teaching her chicks to roost the last few evenings and this is what she has accomplished so far. These guys and/or girls are getting pretty big, but they still need their mama to comfort them as they go to sleep. It's hard to see in the picture, but there are two chicks under one wing, one chick under the other wing and one chick up on her back. Being a mom is such hard work sometimes and getting the little ones tucked in for the night is enough to wear a mother out. They are still in a divided off section of the chicken yard and we will all be happy when they can come out and be free to roam. Mrs. Dandy is very protective of her chicks and terrorizes the chickens if they even look her way, so they'll be especially relieved to be rid of her.
We've been thinking that it may be time to let Mr. Dandy out of confinement. The garden is winding down (not the tomatoes!) and there is probably enough to share, if he decides to start raiding it again. He has been moulting and has lost all of his beautiful tail feathers, though the new ones are already starting to grow. I need to do some research on peafowl management because I'm not sure how he will react to the chicks.
I have been doing lots of dyeing and spinning and have two small knitting projects finished, which I will try to get pictures of soon. As usual, I have so many projects on the needles and am so close to having several of them finished. If I could just have a few days of doing nothing but knitting, but that doesn't seem to be in my future for awhile. I'm looking forward to cooler weather and even some long, rainy days when I can be guilt-free (almost) about staying indoors and knitting. I have such a hard time allowing myself to knit during the day. There always seems to be so much to do and I keep thinking, if I can just get caught up (I know...it will never happen). How do you fit in knitting time?
Posted by Dianne MacDonald at 12:02 AM