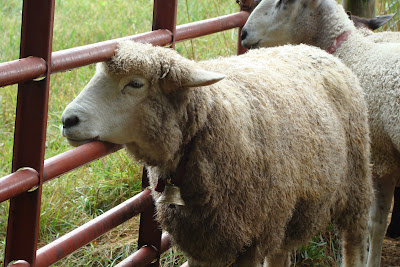 You know how sometimes things just seem to be so great, like you are finally getting a handle on things, getting on top of it or feeling somewhat in control? And then, wham-mo, when you are least expecting it something you don't want to face just pops up and forces itself on you. That happened today. We noticed Pauladeen was not with the other ewes, but was off by herself, down and uncomfortable looking. When I went to check on her----there it was, the awful prolapse, again. If you have read the accounts of lambing season here this year, you may remember that she prolapsed before lambing and we were able to sew her up and pull her through the lambing. She has prolapsed since then, a couple of times, and we have sewn her up again and yet again. It had gotten to the point where she was worried anytime we came near her. We were hoping that when her lambs were weaned and her hormone levels returned to normal, the problem would be solved. When I saw her this morning, I knew what needed to be done this time. We have tried everything we know to do and nothing is working. So, I made the hard, hard decision to let her go. It's the hardest decision I've had to make in a long while. She was my favorite, my special personality, the one and only Pauladeen. It breaks my heart to know she will not be at the gate to greet me anymore.
This is so strange because a friend of mine and I had just recently had a discussion about how we really didn't get very sentimental about our animals anymore. Both of us have been raising livestock for a long time and know the reality of life on the farm. Bad things happen, often in spite of herculean effects to prevent it. You just have to face facts and move on. And here I am, crying over Pauladeen and wishing, wishing, wishing I had not made the decision to breed her (which may or may not have prevented the prolapse).
Soon, I know I will be able to tell Pauladeen stories again, and not tear up. I have her daughter and she is sweet and personable and has her mom's great fleece. I will not ever breed her, in case she is genetically predisposed to prolapsing. I have Teeny, who is the new clown, funny and sweet, wants to be a constant companion to me. It has just now occurred to me that this post is related to the one just previous. It was not my plan to lose Pauladeen so soon, but there is Teeny waiting in the wings to be the new quirky personality here on the farm.....ready to step into Pauladeen's hoof-prints.
I've had enough life lessons for a while.
Posted by Dianne MacDonald at 7:33 PM