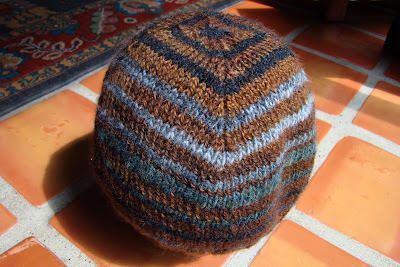 Not long ago, Jared, at brooklyntweed put a free pattern for his "Turn A Square" hat on his blog. I literally dropped what I was doing and went in search of some appropriate handspun from the "wall of wool" in my studio. I knew I had plenty of leftover bits of Noro Kureyon (doesn't everyone?) to use for the striping. I found the colors I wanted, then when I was well into the knitting, discovered I was going to run out of the handspun before I finished. I started cheating on the stripes, making the Kureyon ones bigger. Then, as luck would have it, found another little ball of the handspun, so just reverted back to the original pattern. In the end, it didn't really matter. I really like how the hat turned out. It is very masculine looking, but I can see that using more feminine colors would make the hat equally appealing. There was just enough going on with this hat to keep me interested in finishing. The only problem was there was no one around to model it while I played photographer! It was a quick and fun knitting project.

If you haven't read brooklyntweed, be sure to check it out. His projects really appeal to my sensibilities: classic, not fussy and, of course, lots of tweed.
Posted by Dianne MacDonald at 10:17 AM