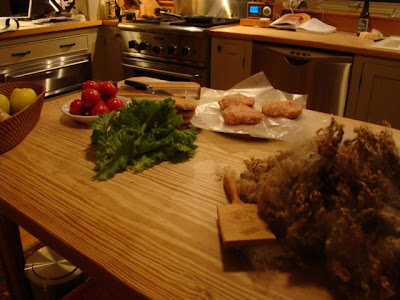 or lunch, or breakfast? My husband loves to ask that question in a funny sort of way. He says it in a funny sort of way and sometimes I think it's funny and sometimes I don't (because I know he really means it in a serious sort of way!). Usually, I reply that I don't know where his lunch is and maybe he should look around for it (or maybe fix it himself). Of course, I'm the cook around here, so it is up to me to come up with dinner, but not so much with the breakfasts and lunches. I like the idea of it being self-serve for those meals. Over the weekend, both nights while I was assembling dinner, I noticed the above situation on the counter or the work-table. Food being prepared or served.........and, a nice little pile of fleece that had recently been washed and was being admired and fondled. I know the sight of sheep's wool on the counter right next to the food might gross some people out. Luckily, no one in this household is affected in such a way. In the 10+ years we've been married, Mike has adjusted to having a lot of fibery stuff around and I don't think he has ever complained about it. I guess that's worth fixing a few breakfasts and lunches........just to be nice. 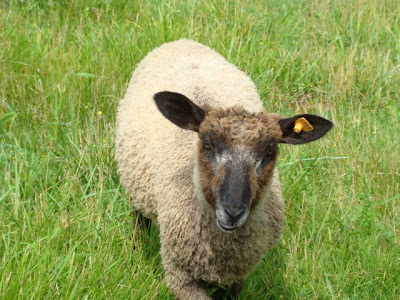 The self-serve season of the year has started for the sheep, llama, alpacas and donkeys. The dogs, barn cats, peafowl and chickens still get daily service, but everyone else out there can start fending for themselves. Uh oh, here comes James Bond.........he's looking for a bottle and he means business. 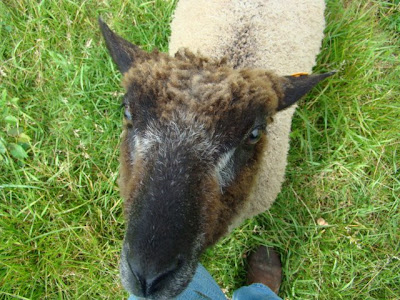 I'm in the process of weaning the bottle lambs and they are not one bit happy about it. We are down to one bottle a day now, and though they are fat as butter-balls, they still run up to me like they are starving to death and proceed to climb all over me to see who can get the first swig. It's to the point where I need to have on jeans to keep from having hoof print bruises on my lower half! I'm ready to be finished with preparing and washing bottles for the year. 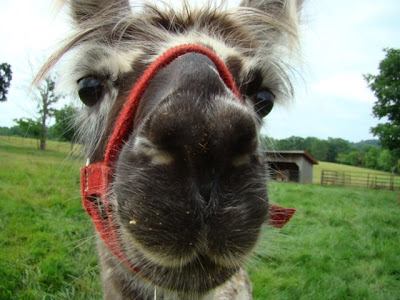 And one other weaning update.......Pippi is finally resigned to being away from her mom and is hanging out with the lambs full time now. I'm hoping she will grow into the same patient, long-suffering kind of lamb companion as her mother. Notice crumbs on her face? She still gets a little something, whenever I can sneak it to her!
Posted by Dianne MacDonald at 4:53 PM