I am the perpetual student 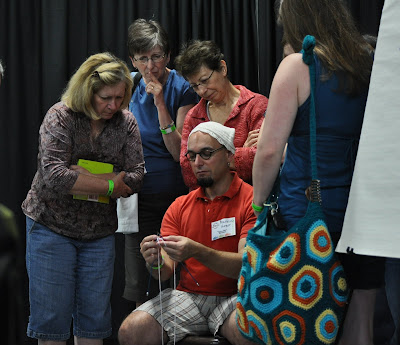 and hope to remain so. There's nothing quite like taking a class or two to get me feeling creative again. This past weekend, Mike and I drove up to Chicago for a little get-away time. As we were walking out the door on Thursday afternoon, I might have been heard to say, "It's just not worth it! It's too stressful to leave the farm and the animals. We might as well stay home." I'm so glad we didn't give up on going. I took some classes at the Midwest Fiber and Folk Festival (and did just a little retail therapy). Friday's class was with Franklin Habit (that's Franklin doing a demo-and wearing a lace trimmed night cap!) and I can tell you he is just as entertaining in person as he is on his blog and in his book. Not only was the class enjoyable, but I learned a lot. We knit a miniature Tomten jacket, using Elizabeth Zimmerman's instructions, which had been adapted by Franklin. When completed, mine will fit an American Girl doll. If I could just finish up my Shepherd's Jacket and my Einstein Jacket, I might be tempted to cast on for a grown-up size Tomten. It's so cleverly designed, as are all of EZ's patterns. Franklin is a HUGE Elizabeth fan. When I told him I had actually known Elizabeth, he nearly swooned! (It's true----and to prove it, I have a big picture of myself with Elizabeth and Meg that was taken at knitting camp many, many years ago. I'm going to frame it and hang it in the new studio.)

At the end of the class, I asked Franklin what we might have to do to get him to teach at our very own Kentucky Sheep and Fiber Festival, next May. His answer was, "Just ask me!" So, anyone out there interested in taking a class from Franklin? I can highly recommend it. 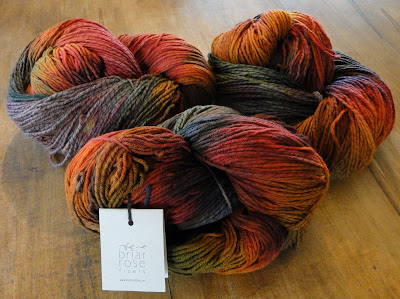 As for that retail therapy......you know I can't pass up a chance to buy some Briar Rose yarn. I think Chris (the owner/dyer extraordinaire) is one of the nicest people on this earth and I don't think I've ever seen any colorway of her yarn that I didn't absolutely love. Of course, I'm so predictable, the yarn I bought is me all over the place!
Posted by Dianne MacDonald at 7:00 PM