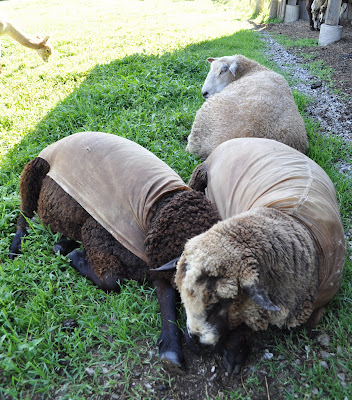 I keep coming up with these blog titles that are phases from songs....don't know where they are coming from. Then, I walk around for days with the song going on and on and on in my mind. Anyway, the title of that Beatles song (and later by the Turtles) is what I thought of when I saw these guys a few mornings ago. It wasn't that long ago that Mr. Lucky and Ollie were pushing, shoving, head butting and generally trying to dominate. On shearing day, I decided to put Buddy in with them and that changed the whole dynamic. It's not that Buddy is a more aggressive boy. He's been wethered and is really just a big baby. He is bigger than they are, but I think it's just his mellow attitude that has influenced them. Now they are all best buds! Don't they look sweet? 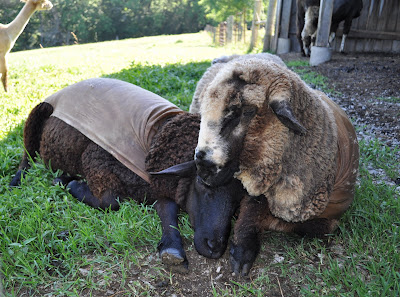 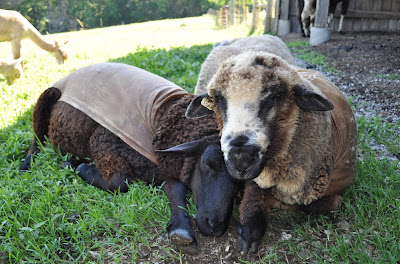 It's hot, hot, hot here, but so is the whole right side of the country, so I'm not telling you anything new. The combination of the heat and not having internet for three days (yes, again!) has made me not want to be outside at all. Of course, I have to be outside to take care of the animals, and, unfortunately for them, they have to be outside all the time. I went to Lowe's today and bought another huge barn fan to put on the alpacas and llamas. I'm worried about getting everyone through this week.

If you are out and about tomorrow (in the predicted 97 degree heat), come on by Henry Clay's home, on Richmond Road. They are having Ashland's Country Life Festival and Olive and I will be there. I'll be demonstrating spinning wool (I know!) and Olive will be wearing wool and, well, .............just being Olive. The hours are from 10 am to 2 pm. Please be sure to bring a cool breeze along with you!
Posted by Dianne MacDonald at 12:01 PM