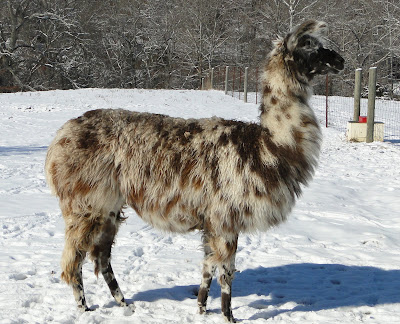 She's just about the best baby sitter around here, though she isn't really watching after babies at this time of year. Actually, her job is even harder at the moment because she's watching after a bunch of silly teenagers. Pippi is a grown up girl now, but still as sweet as ever. She and Strawberry are in with those silly teenage ewe lambs. Strawberry just barely tolerates the nonsense that these girls act out every day. As I've said before, Strawberry has a "serious" personality. She doesn't go in for much goofing around. When we have little bitty lambs, she will let them use her back for climbing-jumping-king on the mountain games, but only for a little while. Then, it's "don't bother me". It's actually kind of amusing to watch Strawberry try to make these girls stay out of her hay feeder. I've never seen her do a full-on spit (not ever-regardless of what you might have heard about llamas), but she does do a spit-spray kind of thing....more like a sneeze, really. The ewe lambs are usually totally oblivious! They have a pretty secure sense of entitlement. If there's food out, it's theirs to share. 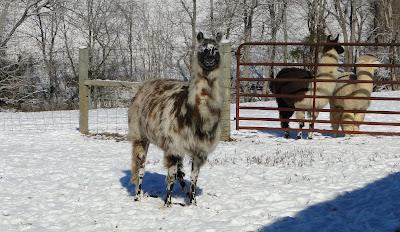 (That's brother Finn and Flashpoint in the background)

One of the best things about having animals, besides their interaction with me, is observing their interactions with each other. It's not exactly the Peaceable Kingdom around here.......more like a United Nations with on-going negotiations.
Posted by Dianne MacDonald at 3:00 PM