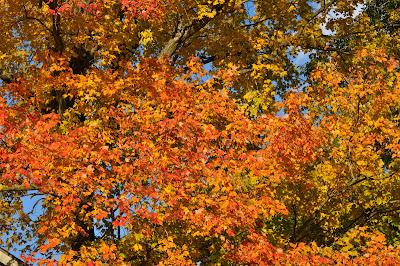 You know,  most of the time I love where and how I live,  but sometimes,  well sometimes,  not so much.  The last week has been not so much.  Last Wednesday ( not today ) morning we had a ferocious storm .... lots of thunder and lightning,  followed by much rain.  The problem came with the lightning, which struck our phone line and blew my dsl filter right off the wall and into many little burned pieces.  So,  no phone and no Internet.  This is a major inconvenience because all the calls for my husband's veterinary practice come in on our home line,  not to mention the fact that most of my interaction with the outside world comes through my computer these days.  After many calls to the phone company,  and their many promises for having it fixed by certain time ( which came and went ),  we resorted to  having all calls forwarded to his cell phone.  Now,  mind you,  we do not have cell phone coverage here at the farm,  so we could only get phone calls if we were not at home.  But,  I couldn't leave home because I was supposed to be here waiting for the repairman from the phone company,  who was supposed to arrive immediately,  if not sooner.   Now,  I know these things do happen to people who live within the boundaries of civilization,  but it seems that living "out here" means that we have to cry louder and longer to get the service that was promised to us when we signed up with Windtream and when we send in our check each month.  Finally,  finally a very nice repairman arrived Friday afternoon and,  after much going back and forth,  he found that lightning had broken a wire inside the box on the pole at the road and again about 2 feet outside that box.  Weird,  but I was grateful that it was not something inside the house,  because then they charge you big time if they have to come inside to repair anything.  So,  why am I still being gripey about it?  Because at this moment,  we once again have no phone service,  since sometime Monday morning !  Six days out of eight with no service.   When I called yesterday to remind them that they had promised to have it repaired by Monday evening,  I was told the repairmen were especially busy and they would get here when they got here.  Sigh ....... and it's not as if we have any alternative.  So, we wait.  Anyway,  that accounts for my silence for the last week and I'm hopeful that I still have one or two readers left out there in the world! 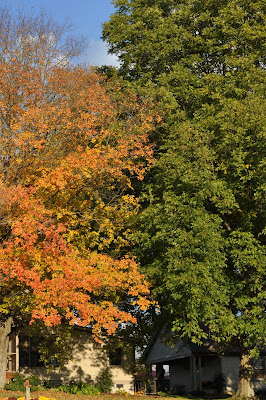 So,  what are else are we watching and waiting for around here?  I'm watching the trees turn and the leaves fall ( along with the pecans from those huge pecan trees around our house - those are the big trees that are still green ). 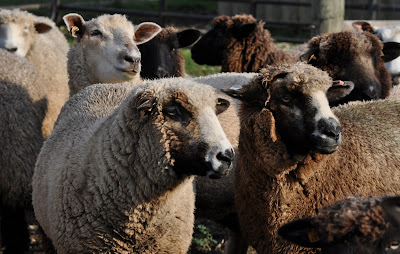 These girls?  They're waiting for the "man of the year"  or I should say "ram of the year" .  Of course, they don't know it yet,  but  they don't have long to wait.  He'll be arriving at Tanglewood Farm tomorrow!
Posted by Dianne MacDonald at 6:02 PM