Today I'm starting an idea I stole got from Juniper Moon Farm to introduce you to a different member of the flock each week or so.  Actually, I didn't steal it .... I do have their permission - thanks, Caroline.  I thought I'd start with the youngest members of the flock.  These are the ones I call the little girls.  They're the ewe lambs that I've decided to keep and they will eventually join the brood ewes,  when they are mature enough to be bred. 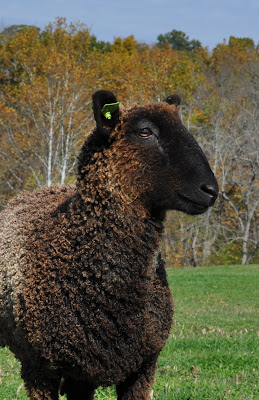 So, without further ado,  may I present Poppy !

Though you might not suspect it at first glance,  Poppy is one of Birdie's sisters.   There is yet another sister,  whom you will meet soon.  The mother of the triplets is a purebred Bluefaced Leicester and their father was Henry ( 1/2 Wensleydale - 1/2 Cotswold ),  and the combination of those three breeds accounts for that gorgeous fleece.  I'm totally in love with the fleeces that Henry passed on to his progeny and,  especially now that he's gone,  I wish I had given him more ewes to breed last fall.  I have kept nearly all of Henry's ewe lambs and think they are going provide me with some wonderful handspinning fleeces.   Under that beautiful frosted color patterning,  Poppy has a silky, lustrous fleece that will be a dream to spin.


Poppy has been slow to make up to me.  There is a huge difference between the lambs raised strictly on their mother's milk and those that I supplement or raise entirely on a bottle.  Luna and Birdie come running to me still,  even though it has been a long,  long time since their last bottle.  In fact,  they sometimes make it difficult for me to pet on,  or take pictures of,  the other lambs because they have to be practically in my lap whenever I'm around them.  When I bring the little girls into the barn in the evening for some grain,  I've been sitting down in the pen and just letting them all have a chance to be close to me without there being any " torture " involved ( that would be their definition of de-worming medication,  foot trimming,  eartagging ).  Poppy has been very cautious,  but oh so slowly,  I'm winning her over.  So far,  I'm only allowed a chin scratch or two,  but I can see that she is starting to overcome her shyness and think of me as her friend. 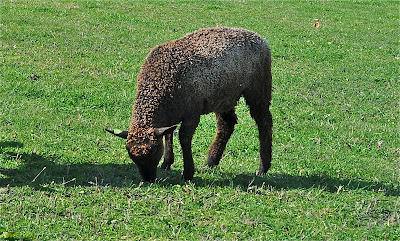 These pictures were taken this morning,  and as you can see,  we have sunshine and green grass going on here.  That green grass is especially good news,  because it delays my having to feed hay twice a day.   Just one of those things that makes a shepherd happy !
Posted by Dianne MacDonald at 2:44 PM