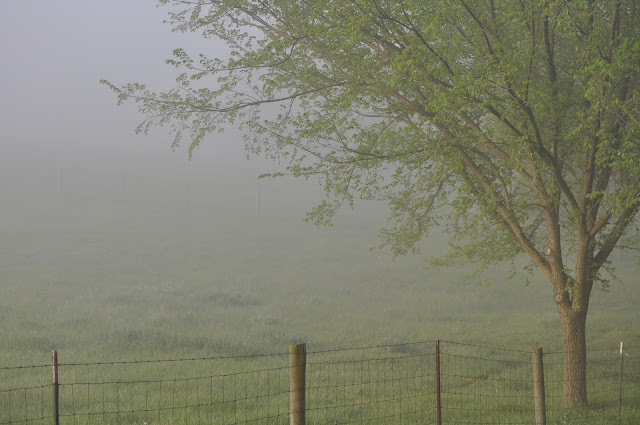 Being just above the Kentucky river, we often have mornings that look like this.  The fog rolls up from the river, sweeps over us and dissipates quickly.  I often think of the Carl Sandburg poem, "The fog comes on little cat feet. It sits looking over harbor and city on silent haunches and then moves on".  The cat image is such a perfect metaphor for the way fog moves across our farm.  I love looking out and seeing everything softened and blurred by the mist.

I'm not much of an early riser.  Unless I've awakened before daylight and can't get back to sleep, I rarely see the sun coming up.  I sometimes think I'd like to be a morning person.  People I know who get up early do seem to accomplish a lot more than I do.  The problem is, I'm a night person.  If I'm reading a book or knitting (or surfing the black hole known as Pinterest), I can lose several hours before I know it and then it's 1:00 am or later.  I don't know if it's even possible to change my internal clock at my age.  Even as a child, I would read under the covers with a flashlight, so that my parents wouldn't know I was still awake.  I can't take naps either,  unless I'm sick and then I can sleep all night and all day, sometimes even a whole weekend.  How I envy people who can "power nap".  My husband is one of those and my friend Teresa can do the same.  Fifteen minutes and they're good as new!  It seems impossible to me. 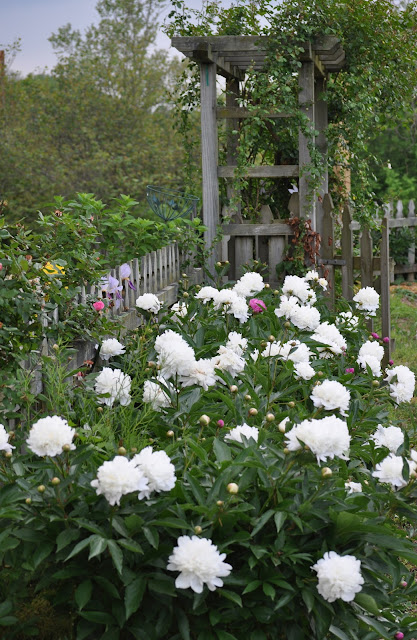 My favorite flowers have been blooming in abundance this year, or at least they were before the thunderstorms we experienced early Saturday morning.  I'm glad I got this picture earlier in the week, because the rain and wind wreaked havoc on the peony beds and they're beaten down now.  I think I've mentioned before that these peonies have been transplanted so many times, it's a wonder they grow so well.  They came from Mike's grandmother's farm, so they are especially meaningful.

This week, I may not be rising before sunrise, but I'll be up and working pretty early because there are on-going preparations for the Kentucky Sheep and Fiber Festival,  preparing eight bottles a day for the bottle babies, trying to get more of the garden planted, and mowing, mowing and more mowing. What's going on at your place?
Posted by Dianne MacDonald at 4:35 PM