A pair and a spare 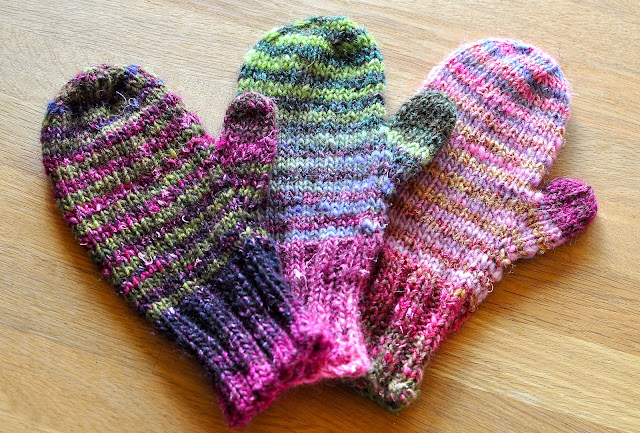 Not long ago,  Susan Anderson released her Waiting for Winter Mitten pattern,  and though I have knit many a mitten and have many patterns for said mittens,  I wanted to try it.  I have a bit of a pattern addiction and love trying out new ones.  I was hoping this one would be super simple and easily memorized ... you know,  the kind where the numbers are easy enough to remember that you can pick up needles and yarn and jump right in without having to hunt for the pattern and try to remember the changes you might have had to make (especially if,  like me,  you often forget to make clear notes of pattern alterations).

Susan's got a mitten knit-along going on right now on her Itty Bitty Knits group and lot's of people are already posting their versions of the pattern on Ravelry.  These are my first attempt and I've already cast on for the next pair.  They are fast,  fun,  easy and just slightly addicting to knit.  The whole time I'm knitting,  I'm thinking of ways to knit the next pair.  For my 'pair and a spare',  I used one skein of Noro Kureyon and one skein of Silk Garden,  alternating every two rows.  After beginning the second mitten,  I could see that the colors were going to be very different (ah,  the beauty of Noro's variegation that makes it so interesting to knit with!).   I ended up knitting a third mitten in order to get a little more coordination.   I don't have quite enough yarn left for a fourth mitten,  so this little group has become  a set of fraternal triplets and I kinda like the idea of having a back-up mitten to replace the one that invariably gets lost.
Posted by Dianne MacDonald at 11:26 AM