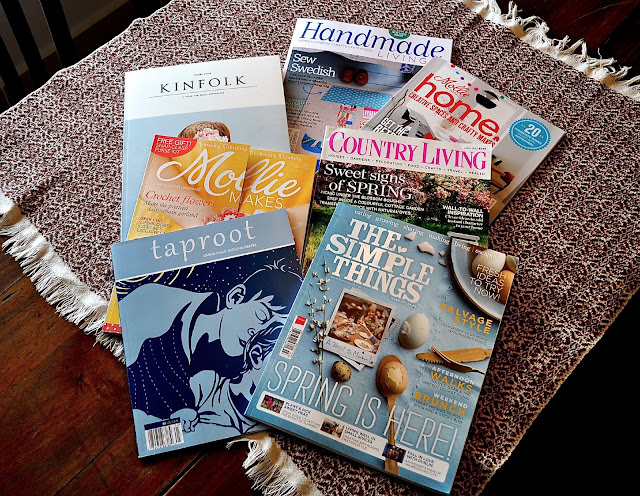 Not long ago, I promised a post on some of my newest reading matter.  It's not so much books right now, but some terrific magazines that are entertaining me.  People who know me well will tell you that I always have a stack of the newest issues out on the table.

For more years than I can even remember, British Country Living has been at the top of the stack.  It's one of those magazines that I keep years of back issues and cannot bring myself to get rid of.  Last year I started subscribing to Kinfolk, which has the most beautiful design aesthetic.  It really makes you want to step into the pages and become part of the scene being portrayed.  Another really great American magazine is Taproot.  The editor is none other than Amanda Soule (of Soulemama fame).  It's a wonderful combination of food, craft, photography, artwork and so much more.  Kinfolk and Taproot are my serenity magazines.  They are calming and thought provoking to look at (in the same way reading Soulemama first thing in the morning starts me off thinking about something Amanda has written).

Lately, I've discovered a few more British magazines.  Mollie Makes is about crafts and those who are making things.  The articles are mainly about craftspeople in Great Britain and it's fun to see what is happening there.  My newest favorite is The Simple Things.  The front of each issue declares: eating-growing-sharing-making-living-escaping.....which just about covers it all for me.  I love everything about this magazine (even the advertising is pleasing to look at!) and it's destined to be one of those that stays on my bookshelves.  Handmade Living is another British magazine that I think I'm going to like, though maybe not every issue.  I tend to pick up magazines at the bookstore until I'm sure it's one I don't want to miss each month.  The British magazines are pricey, no matter whether you subscribe or buy on a month by month basis, but I justify it by the hours of pleasant reading and looking I get from each copy.


I have a funny story (at least it's funny now-then, not so much).  Several months ago I decided to order a subscription online to The Simple Things.  It was a Friday afternoon and I filled out the form and submitted my debit card information and was declined.  What?  Wait a minute - it's a debit card, so I know the funds are there.  I tried several more times, with the same result.  So, then I tried with a credit card.  Once again, declined.  Frustrated and assuming it had something to do with the magazine's website,  I quit trying and went out to do evening chores.  Saturday, I stopped at the grocery for a few things and my debit card was declined!  Ack!  I ended up using my Shell gasoline credit card to pay for groceries.  So then, I stopped to get gas and my Shell card was declined!  When I got home, I tried getting into my bank accounts online and was declined there also.  By this point, I was frantic and sure someone had somehow hacked my banking information.  It took several days of phone calls to straighten up, but it turned out that someone in the fraud department (wherever that is) decided my purchasing something online from England was too unusual and that someone had stolen my card numbers.  So, they shut everything down - everything!  I was instructed to alert the fraud department from now on, whenever I intend to travel or make "unusual" purchases.  Considering the fact that I've made purchases from many places over the years, I found the whole thing ridiculous.  I appreciate the fact that they were supposedly trying to protect my money (though I'm pretty sure it was their own liability they were really concerned about), someone, somewhere got a little carried away.  It did make me think about how easily we can be separated from our own money when someone else is in control of it!
I'm not sure what the moral of the story is, unless it's to maybe keep a little cash on hand, just in case the "fraud department" becomes displeased with your buying habits!
Posted by Dianne MacDonald at 3:19 PM