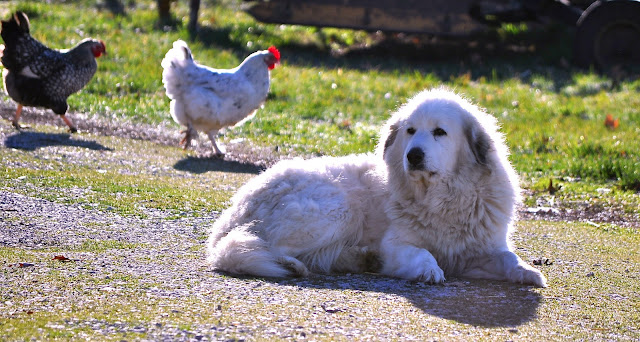 My husband has a favorite saying in answer to whatever is plaguing me at any given moment.  "Oh well, it's always something".  Sometimes it's funny and sometimes not.  Yesterday was one of those days when it was not.  We received a call from a neighbor early yesterday morning, telling us that there was a dog on the side of the road that looked like it could be one of our Pyrenees.  It was our weird, sweet Holly.  The past few years she's gotten progressively more fearful of storms and it seemed as though nothing we tried seemed to calm or comfort her.  Usually, she would run off and hide and show up the next day, looking as though she had been through hell.  Monday night we had one of the most dramatic storms I can remember in a long time. So much thunder, lightning and heavy rain and it went on forever.  Holly had obviously started running and just kept going because she was 1 1/2 miles from home.  At some point, she must have run out into the road and been hit.  Holly had been here five years and I wrote about her arrival here.  We don't know what her life experiences were before she arrived here.  She had a quirky personality and clearly preferred her sheep to hanging out with humans (which is exactly how it should be for a dog who's been bred to protect livestock).  She's been a wonderful guardian for our animals - always sweet and kind with the ewes and lambs, never playing rough or chasing them.  We are going to miss her so very much.  We still have Aslan and are most likely going to need to start a new puppy soon, though it's difficult to even think about that at the moment.  It's all part of that ever-present cycle of life and death here on the farm. 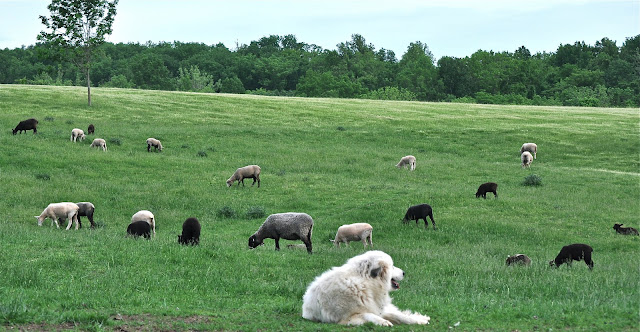 Posted by Dianne MacDonald at 4:09 PM