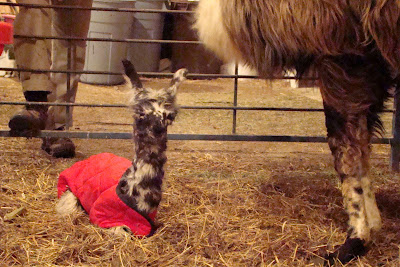 Tonight(Tuesday night) I went to the barn around 10 pm for my last round of checking on everyone. I probably don't need to do it at this point, but it makes me feel better if I know they are all in their appointed places. Strawberry, our llama, was standing at the doorway of the barn, "talking" to me, acting as though she wanted something. I had noticed Holly was out in the field with her, instead of with the lambs, as she usually is at that time of night, and I thought it was a little strange. I glimpsed something behind Strawberry, so went over for a closer look. And there she was! At long last, Strawberry has had another cria, and for the first time ever, we finally have a girl! We have waited a long time for her. Strawberry has had several unsuccessful breedings over the last 4 or 5 years and we had come to the conclusion that there would be no more crias. Last year, my friend, Lindy, let us bring her llama stud here to our farm and keep him with Strawberry in hopes that pasture breeding would be more successful than our previous "scheduled appointment" breedings. The last time we saw them together, I wrote it down on the calendar that Strawberry would be due in late August. I thought she had acted pregnant, but when the time came and went, I decided I must have been wrong. Strawberry just had her own time-table for when and where it would happen. Even though I have been home all day, I missed it. I find it so interesting that Holly was there in the field with her, watching over things until one of the humans finally showed up to take over!

The picture is not so great, but you can see how tiny she is and how different her markings are from her mother. In the next few days I will get some outdoor shots that will show her off a little better.
Posted by Dianne MacDonald at 12:18 AM