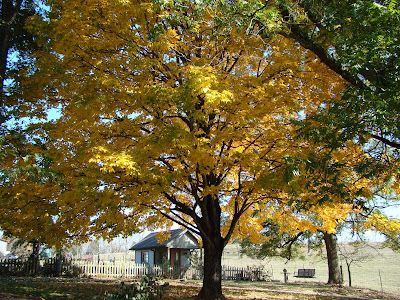 This has been a busy day right from the get-go. I woke up really early for me (five-ish) and kept going over my to-do list in my head until I finally just gave up and got out of bed. I thought I might slip out quietly and go vote at the volunteer fire station just up the road and beat the crowds. Ha! At 6:05 am the parking lot was full and both sides of the road were lined with cars and trucks. And the line was out the door and all the way across the parking lot! Wow! Never, ever have I seen so many people voting. I just turned around and came back home. I went back around 2 pm and only had to wait about 10 minutes, but the place was a constant stream of traffic. I love this---that so many of us are engaged this year and taking part in one of the things that makes America great. We have a choice and today many of us exercised that choice. 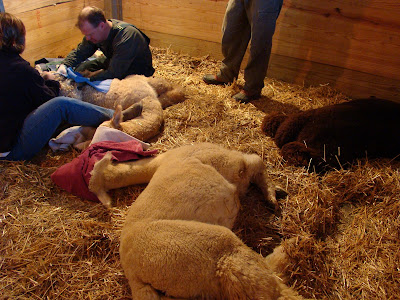 The time between my first attempt to vote and actually voting was filled with quite an experience. Around 8 am, I loaded the three alpaca boys into the trailer and drove over to Seldom Scene Farm because Lindy had scheduled the veterinarian to come out to castrate some male alpacas this morning. It seemed like a good opportunity to get my boys done at the same time. Dr. Keith made the procedure look pretty simple and he was great with handling the boys in a non-stressful way. In the picture they are all feeling no pain (the towels over their heads are to prevent them scratching their eyes with straw while under the anesthesia). Stormy (the black one) took the longest to anesthetize. After this picture was taken, he woke up, stood up and then wouldn't go down again until he had been dosed several more times. The boys have been taking it easy this afternoon and don't seem to be feeling any the worse for the experience. I'm really glad to have this little chore out of the way. Prince has been feeling his oats lately and trying to assert his manhood! 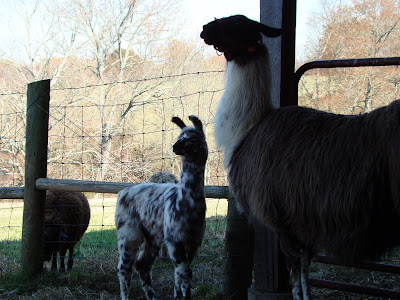 And, who is this? Someone else came home with us from Seldom Scene Farm. (Notice Strawberry's ears. She doesn't look very happy, but on further investigation, she changed her mind.) Grato stayed with us for a spell last year and gave us the lovely Pippi. Today he seemed a little spooked by the bells on the sheep in the next pasture, but eventually decided they weren't going to come after him and got busy on the task at hand! 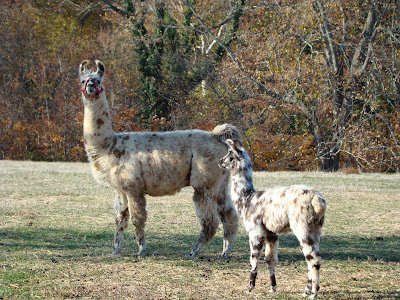 Like father, like daughter! Now you can really see where Miss Priss gets her good looks.
Posted by Dianne MacDonald at 4:44 PM