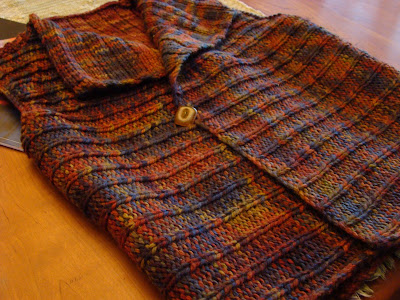 That would be in the state of denial. The whole time I was knitting the right front of this vest, I would stop and look at it and think to myself, "well, the pooling is just barely noticeable. I'll just keep going and when it's all put together, no one will even see it". Oh, the lies we tell ourselves (or maybe it's just me who does that). Right up until the moment I looked at the picture I had taken, I had convinced myself I could get away with leaving it. I've ignored it for several weeks now and it still has not corrected itself. Sometime after Christmas this thing gets a do-over. I love the yarn. It's one of the Briar Rose skeins I bought at Knitter's Connection, in Columbus, back in June. The vest pattern is really cute and easy and fast (if you don't mess it up so that you have to make it twice). It's from Rowan's Colourscape Chunky Collection. The pattern calls for Colourscape Chunky yarn by Kaffe Fassett which is lovely, but rather expensive at $23.95 per skein and the smallest size calls for 4 skeins. 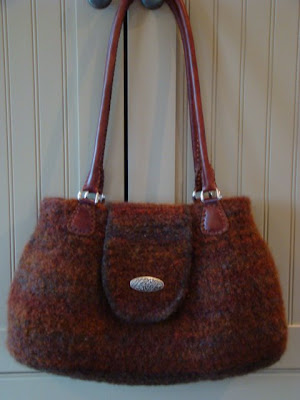 One small success story is this purse. I knitted and felted it many, many months ago. Finally got the handles and closure flap sewn on a while back and will hopefully finish the lining this week. The pattern for the purse is from the Pursenalities book. The fabulous leather handles were purchased two summers ago in Napa Valley at a knit store in St. Helena, Muse. (I have seen them advertised in some knitting magazines.) I bought two pair even though at the time I had no idea what I'd use them on. The yarn I used is some of my own handspun, hand dyed, plus some handspun natural colored charcoal gray for the bottom and trim around the closure flap. I'm not sure about the button at this point. It's not really necessary because there will be a magnetic closure under the flap. I'm pleased with the way this turned out and think I will actually use it a lot.

The Christmas knitting is not going so well this week. Revisions are under way.
Posted by Dianne MacDonald at 10:11 AM