We're having a snow day! 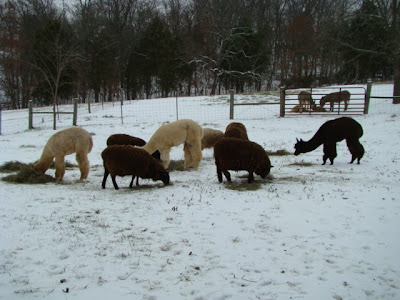 It actually came! The snow actually came as predicted last night. Also, some sleet and freezing rain, which we could have done without. Feeding time at the barn this morning was pretty funny. For my "teenage" sheep (see previous post), it was their first glimpse of the white stuff and they were clearly baffled, as was Pippi. They quickly got over the shock and starting running in circles, kicking up their heels and jumping in the air. Wish I had been able to capture it for you to see. Then, as usual, their main concern was when breakfast was coming. 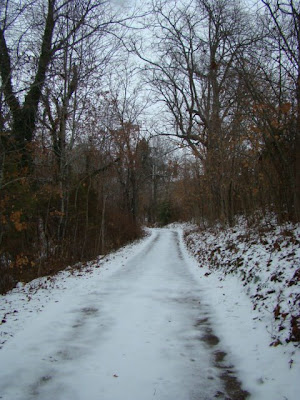 My husband stayed home today because our farm road is treacherous in this kind of weather. It is one quarter of a mile long, down a hill, across the creek and up a hill on the other side. If you happen to slide off the road, it could be a while before you came to a stop. When I walked out this afternoon to get the paper and the mail, I could see lots of little rabbit prints and a few deer tracks, but otherwise, not much had been stirring. 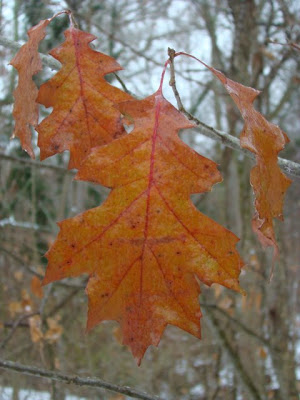 I made butternut squash soup for dinner tonight, using squash from the garden. I found the recipe a few months ago when I was in the throes of purging my magazine collection. It was in an old Organic Style (no longer published) and is definitely a keeper. I also made that oatmeal whole wheat bread yet again. It has become a real favorite around here. It's easy to whip up on short notice and is great warm from the oven and then toasted for breakfast the next day. 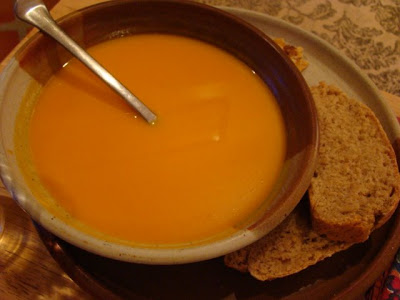 1. In a large saucepan, heat the oil over med. heat. Add the onion and cook until it starts to turn golden, about 5-10 minutes

2. Add the honey and cook until it bubbles

3. Add the squash and 6 cups of the stock to saucepan. Bring to a boil and lower to a simmer. Cook until the squash is very tender, about 30 minutes, adding more liquid as needed. Remove pan from heat and cool for 15 minutes

4. In blender, puree a few cups of soup at a time. Strain for a smooth soup. **I use my stick blender for this and do it right in the pan**

5. Return soup to the pan. Add cream, salt & pepper. Heat until very hot, but not boiling

In a way, I needed this day to ratchet down some of the pressure I'm starting to feel about not being ready for Christmas. On the other hand, you could say it's been another excuse for procrastinating a little longer. In any case, my "snow day" is coming to an end and tomorrow means back to the real world.

ps-I had the name of the magazine wrong. It is Organic Style and not Organic Life and in a strange sort of coincidence, Susie Quick, the woman I've been sharing some Saturday Market time in Midway with, was the food editor of that magazine. I never cease to be amazed at how small the world really is!

Posted by Dianne MacDonald at 11:30 PM