Best buds (everybody needs a friend) 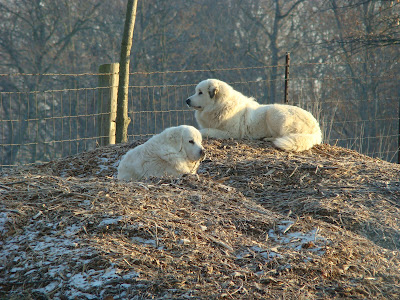 Last spring, when Holly decided to come live with our sheep, Hannah was not happy----at all. She spent the better part of several weeks barking at Holly every time she came near. I could not, for the life of me, figure out what her problem was. Sure, Holly was the new kid, but she was so obviously just like Hannah (though not as big then). And, at that point in time, we still had our ancient old Abby and ancient old Buddy (aka Hannibal) was still here too. All Great Pyrenees dogs and all here to protect the sheep. Abby was the first Pyrenees we got when we bought the farm and decided to get sheep. (I raised sheep for many years in my "past life", but after a divorce and sale of my farm, I had been living in town for several years before I met Mike.) Abby and those first five sheep lived here at the farm for more than a year before we got married and moved to the country. Back then, I drove to the farm every day to feed and check on the dog, sheep and horses. Abby grew up to be a wonderful guardian, very strongly bonded to her sheep and not that concerned with where we were or what we were doing. After a few years we decided to get another dog and bought Hannah from a local shepherd and Pyrenees breeder. Hannah has never been a great guardian---just average. She likes hanging around us more than I would prefer, probably because we were living here and outside a lot when she was a puppy. This winter, with the two old dogs dead and gone, Hannah has finally decided she likes Holly. They are nearly always together and I believe Hannah is finally comfortable with her role as a guardian. It's all well and good to have a job to do, but having a friend around to help sure makes it better! 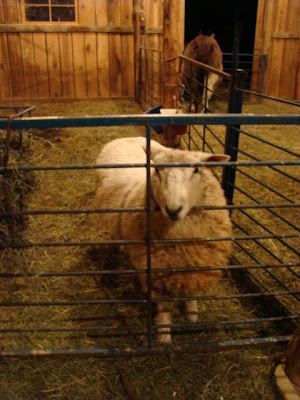 Buddy (the former ram) is finally starting to perk up. He has been mad at us and not feeling himself since his life changing surgery. I think mostly he is lonely for the other sheep. Sheep are not solitary animals. They are flocking animals and are happiest when surrounded by their own kind. This weekend I am going to put him back in with the ewe lambs (all his half sisters) and that should make him feel a lot better.
Though I spend more time alone than most women I know, I feel fortunate to have so many knitting friends, sheep friends and spinning friends from my past and current life to hang out with when I need the companionship of my own kind!
Posted by Dianne MacDonald at 9:42 PM