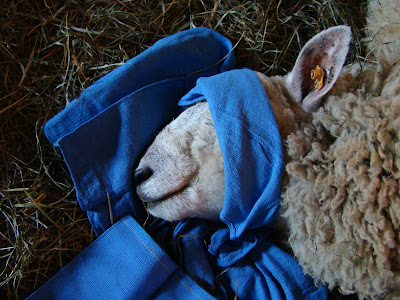 "Ouch!" (Probably he said something much stronger than that, but I couldn't repeat that kind of language here.) Yesterday was the official end of Buddy's career as a ram. The above picture was taken during the surgery. The surgical drape over his eyes was to prevent them being scratched by the straw. The procedure is pretty straightforward and didn't take long at all. He was completely anesthetized, both general and local, so he didn't feel a thing......until he woke up. To say that he is mad at us today would be an understatement for sure. He runs when he sees us! And I don't blame him a bit. I just hope that as the soreness goes away, so will the unpleasant memories and then he will forgive us. He has been such a big pet, especially to me. He was bottle raised and would always come to the fence when he saw me outside and if I sit down near him, he comes to lay his head on my shoulder. I have been dreading the day, but, in order to keep him, he had to become a wether (same as a gelding horse). He has been in with the alpaca boys since he finished breeding the ewes, but has not been happy being away from his own kind. In 3-4 weeks he will be safe to put back in with either the ewes or the ewe lambs and that should settle him down. It is handy to have a husband who is a veterinarian at times like these. He says the procedure is the same as neutering a male cat and that Buddy will be back to his old self soon.
Nothing much else is happening here on the farm as we begin the new year. My first lambs aren't due until mid-March, so except for the twice daily feeding chores and routine barn work, it should be fairly calm for a while. Tomorrow will be a bit of a jolt back to reality when we have to get up early and the phone starts ringing with veterinary house-call clients. We've been staying up later and sleeping in an extra hour or so in the mornings.
In many ways, it's comforting to return to the routine. I remember when my sons were still at home, that first day back to school after the holidays usually found me exhausted and needing a little time alone in the house! I always look forward to the quiet of January and hope to get caught up on reading and knitting. I never do get caught up, but it is nice to think about the possibility. Our Wednesday knitting group has been on a little hiatus for the past two weeks and I'm really looking forward to getting together with everyone this week. 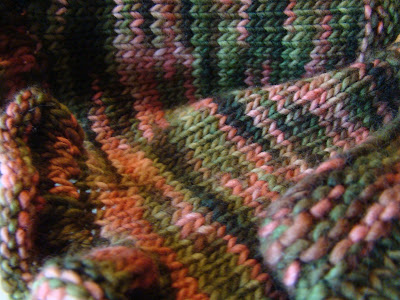 I have done a little knitting the last few days. I've finished a cute Lollipop Hat from "Knit One, Embellish Too" for the soon to arrive new grandson and a "Just Enough Ruffles" scarf came off the needles last night. I know there are hundreds of these scarves out there right now. I knit this one from Malabrigo and I love the way it feels. This yarn is certainly soft enough to be worn next to the skin.I'm this close to having several other projects finished and will try to muster the discipline (there's that word again) to finish them before casting on for anything else. I hope you are getting good knitting time to begin this new year.
Posted by Dianne MacDonald at 10:12 PM