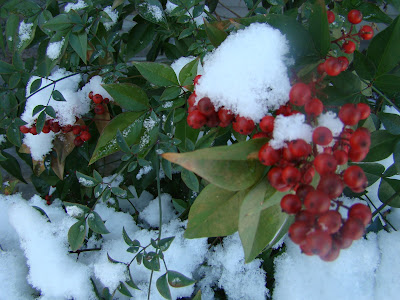 I can't believe it's Monday already. The weekend was chock-full and I wish I could have slowed things down and savored it all more. Friday evening was the beginning of my spinning guild's annual retreat. We have, for many, many years gone to Shakertown at Pleasant Hill, a restored Shaker village, that's only about 25 minutes from my farm. We have rented a restored house on the outskirts of the village and spent the weekend, spinning, knitting, eating (a lot!), laughing and talking. We look forward to it all year. This year Shakertown informed us that they were closing the houses at the edge of the village for the winter, due to the costs involved in keeping them heated all winter. We ended up renting a vacation house at a nearby lake and it worked beautifully. Well, except for the part where I got lost trying to find the place in the pitch black of night and was rescued by a lovely woman who pulled up beside me while I was trying to get a signal on my cell phone to call for help with the directions. She put down her window and said, "Oh hi, it's another Subaru driver, can I help you?" (We were both driving Subaru Foresters) Is that not funny? I thought it was great and she really did help me get to where I was supposed to be going. Anyway, I spent Friday night there and had to leave the next morning right after breakfast. We had gotten tickets with friends to see "Prairie Home Companion" in Louisville on Saturday evening. If you ever get a chance to go to a live show, do it. It is so much fun to see it all happen. Afterwards we had dinner at the Sealbach Hotel, a beautiful historic place in downtown Louisville. We got home just before midnight. Sunday I had to be in Lexington by noon for a meeting, then I cooked dinner for my son and daughter-in-law who just had the new baby and delivered it to them in Richmond (about an hour away). As I was leaving their house to drive home, the roads starting icing up and by the time I got to our little country roads, it was treacherous. I felt as though I had been on a long, long journey by the time I pulled into the farm lane. 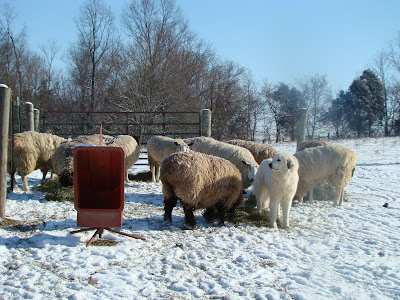 We had a few inches of snow on the ground this morning and it was beautiful. I'm certainly not going to complain about it. I know many other bloggers are probably sick to death of having so much snow where they live. I having been wishing for more snow and less rain! 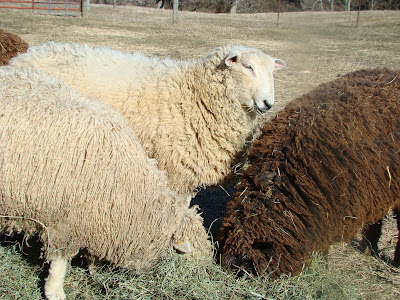 Here's a picture of Buddy I took last Friday, right after he had been allowed to rejoin the group of last year's lambs. Doesn't he look like he's smiling? He has stopped moping around and is acting completely normal now that he is back with "his people", so to speak. The funny thing that happened right after this was that Teeny (little bitty and spoiled, I guess) came up to him and challenged him. Put her ears back, lowered her head and was going to butt him! I broke that up and hope that was the end of it.

Today has been catch-up with barn work, laundry and housework, but tomorrow I plan some knitting time on a new project while I watch the inauguration ceremony. It's a hopeful time for all of us.
Posted by Dianne MacDonald at 4:28 PM