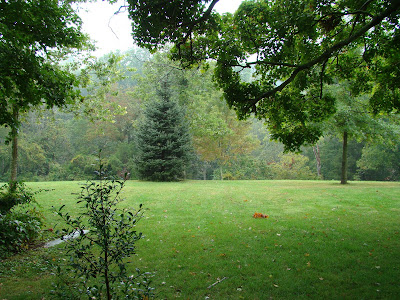 We awoke this morning to a soft, slow rain dripping down through the trees and it made me want to snuggle down in the covers and stay awhile. Alas, that is rarely allowed around here. I love rainy days, so I didn't really mind getting up. All the animals were quiet, except for the roosters, who were having a crowing competition. The sheep love this cooler weather and were out in the rain, grazing contentedly. 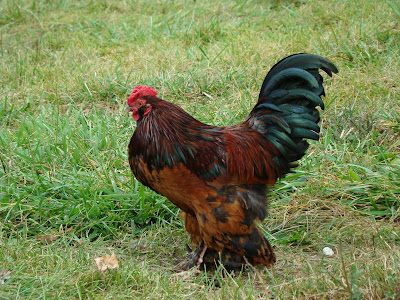 Back to those roosters----we have two right now. They both were part of the clutch that hatched back in the spring. Remember these? They are Cochin bantams and both quite handsome, but we don't need two, so Sara has graciously offered to take one of them and a companion bantam hen. I have been worried they might start squabbling, but, other than the crowing competition, they don't seem to pay much attention to each other. It's possible that being raised with bigger, standard size hens has kept them in their places, so to speak. The Black Australorp hens are at least twice as big as these boys. 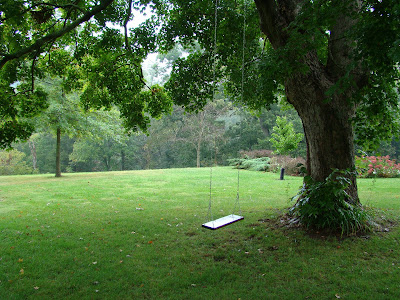 We are in a transition time here at Tanglewood Farm. It's not time to divide the ewes and put the rams in, yet, though I have been considering which ewes should be bred to which ram. I'm thinking that mid-October is plenty soon enough to start breeding. I don't want to have lambs born before the middle of March. Been there, done that, don't need to do it again (at least not on purpose!).
I'm off tomorrow on an adventure to check out "A Wool Gathering" in Yellow Springs, Ohio. They have an impressive list of vendors and at least one of them will surely have something I really, really need. And don't forget that tomorrow is World Wide Spin in Public Day. Thatcrazysheeplady and I are hauling our wheels along, so we can do just that. Hope you have as great a weekend as I'm planning on having!!
Posted by Dianne MacDonald at 3:08 PM