The new CVM girls have joined the "home girls" (the ones who were born here this past spring). I like to keep new arrivals in a sort of quarantine for a few weeks, just to make sure they have adjusted to the routine and are suffering no ill effects from being transported. Usually, when new sheep join the flock, there can be some pushing and shoving, a little jockeying around to show them who's the boss. There was none of that this time. The group took them right in and they all are acting as though they've been together always. It's so nice when everyone just gets along! The boys are still being kept separate, mainly because the little moorit ram has had some health issues. (He seems to be doing fine now.) I'm not planning on dividing everyone up and putting the rams to work until the end of October. It finally occurred to me that because I'm not showing my lambs in competition anymore, I don't have to put myself (or the ewes) through lambing in really cold weather. By the last of March or early April, when the ewes will be due to lamb, we'll have green grass and much more pleasant temperatures.

The CVM boys usually have company in the back barnyard, where they've been hanging out. The chickens can hardly contain themselves in the mornings. When I open their little door to the outside they bail out like parachuters jumping out of a plane! They love digging around in the barn and hunting through the grass for bugs. Frankly, they stay a lot happier and don't squabble amongst themselves as much when they can get out and expend some energy running around (sort of like little children!). 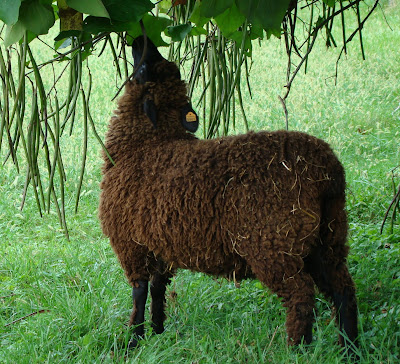 Do you have catalpa trees where you live? As children we called them cigar trees, just because of the way the seed pods look. (We thought we were particularly clever when we pretended to be smoking them!) Catalpa is an Indian word and the tree is sometimes called an Indian Bean tree. Why Jilly was doing this (whatever "this" is), I surely don't know. I've never seen any of the sheep pay attention to the catalpa tree before. They are messy, but interesting trees. They grow rather free form and in the early summer the blooms smell wonderful and the bees go crazy for them.

We are having the most glorious weather this week. It makes me worry a little that there will be some sort of retribution later!
Posted by Dianne MacDonald at 10:00 AM