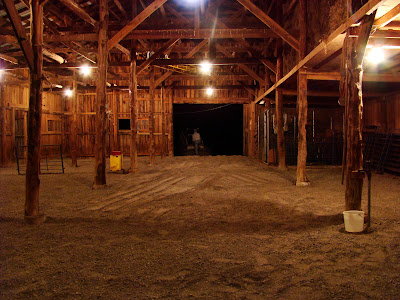 And done in. Whew, that was a big job. The barn is so clean now, I don't want to let any of the animals into it! You know what they say about the best laid plans? Not much went as we planned, but in the end we managed to get it done before the weekend was over. The first trip out of the barn, the manure spreader broke! That was on Saturday and it took until Sunday morning to find someone who could come and weld it back together. By Sunday morning the bobcat had a flat tire.....more time to patch that. Finally, late morning on Sunday, we were able to get serious and we finally finished up around 9 pm Sunday evening. I don't think I have ever worked quite as hard, but it is so nice to have the barn clean and I got a really good workout in the process! 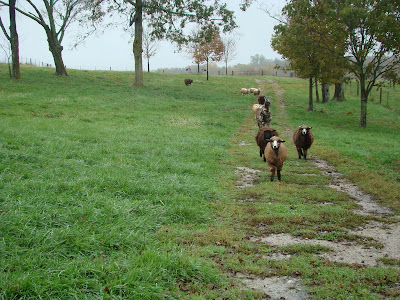 I spent several hours this afternoon putting the panels back up and setting up the pens the way I want them for the next few months. It was kinda like rearranging the furniture. (Put these panels over there and use a large gate to close off that area....no, that doesn't work, need another panel and a smaller gate....do I have a smaller gate?.....where are the longer panels?) I"m close to putting the rams in with the ewes and wanted to have several pens with some separation between them, so we don't have rams head-butting each other through the panels. Actually, the adults won't be in the barn much at all for the next few months. Once I put the rams in, I will leave them out in the pastures. I like the bring the ewe lambs in to feed them a little every evening. I mainly do that to socialize with them. As adults they will be so much easier to manage if I have handled them a lot now while they are young. These lambs are so friendly, I can get them to pretty much follow me anywhere, especially if I have a little grain in the bucket ;-) 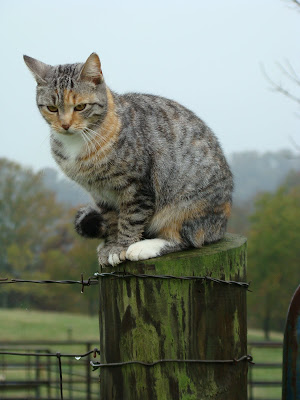 Even though it was raining, Sadie, the barn cat, is always ready to assume the supervisory position while I was moving the sheep around. Tiny as she is, she's convinced that she's the boss of the barn. Unfortunately for all of us, the peafowl seem to be ruling the roost right now (pun intended!).
Posted by Dianne MacDonald at 8:48 AM