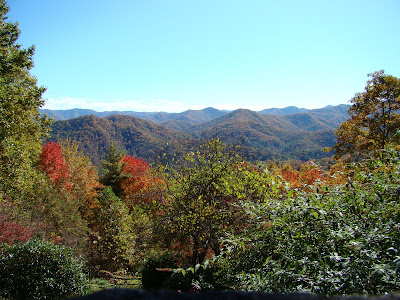 This time I have literally been to the mountain top. It may seem as though I've been a bit of a gad-about lately, but to be honest, this is the only "vacation" kind of trip I've taken in quite a while. Mike and I almost never are able to have time away together, but we managed to take three nights for a short trip to North Carolina. The first night we stayed outside Asheville so I could take a class at SAFF from Rita Buchanan on Saturday morning. Rita is a long-time hero of mine, someone I've admired since way, way back when I first learned to spin. (We're talking close to 30 years!) She's written many books, many, many articles for Spin-Off and other Interweave Press publications, and served as an editor there for years. I'm not sure when I first got to know her, but she's a fabulous teacher (so clear and encouraging) and one of the nicest people you would ever want to know. Over the years she has spun several fleeces that came from my sheep and during the workshop she reminisced about a fleece from a Romney ram I owned long ago. "Bull" was named after that character on a television program called "Night Court" (sit-com from many years ago), because he was so laid back.....virtually bomb-proof. He was one of my all-time favorites and I was so flattered that she actually remember his fleece. 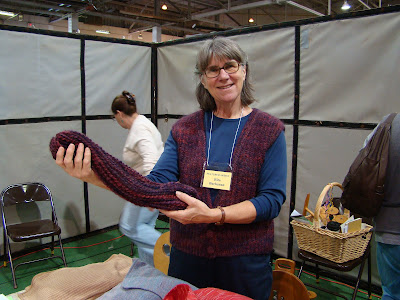 That's Rita after our class. She's holding a skein of yarn, which she said was not perfect (couldn't prove it by me). The vest she was wearing was knit from the same yarn, which she spun and dyed many years ago. Her point in showing it to us was that, though the skein had some irregularities, the vest had been worn many years and no one (except herself) had ever looked at it and pointed out the thick places and the thin places. She said that she had quit trying to be such a perfectionist and was just enjoying the process and the results. Words of wisdom for us all.

Rita gave me the courage to tackle knitting gloves for the first time because of her pattern that appeared in the original "Homespun, Handknit". I love that little book....I'm on my third copy. Sadly, it doesn't seem to be available from Interweave anymore and Amazon has a new copy for $155 ! What's up with that? Until finding Rita's glove pattern, I didn't think I would ever even try to knit a pair; it just seemed impossible, but her clear, concise instructions made knitting gloves easy. 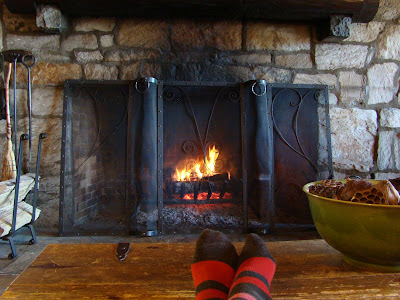 The picture at the beginning of this post is from the terrace at Snowbird Mountain Lodge and it is one of my favorite places in the whole world. We left Asheville right after my class and headed for this spot, which is on top of Snowbird Mountain right outside Robbinsville, North Carolina. The Lodge has an interesting history, but the best part about it is the oh so peaceful atmosphere. There are no televisions, no phones in the rooms, and the big gathering room/lobby has a fire going in the fireplace almost all of the time. The big room is filled with comfy chairs and squishy leather sofas and the bookcases lining the walls are filled with books you can borrow to read anytime you like. And then, there's the food. So, so, so good! This trip, for the first time, I managed to pace myself and didn't leave there vowing to never eat again! Mike spent the day on Sunday hiking in Joyce Kilmer woods, which is nearby. The above picture might give you an idea of how I spent my day. My justification was that I almost never have a day when I don't have to do barn chores, cook meals, clean and/or just generally work at all the tasks that need attention when you live on a farm. I did a little spinning in our room, took a nice, long bath (with no distractions or interruptions!) and then claimed a prime knitting spot on the sofa in front of the fireplace. I was so relaxed, I almost took a nap. (Those who know me could tell you this would be an earth shattering event.)

So, now we are back to our real world, with somewhat of a thud. Our corgi girl, Ivy, has hurt her back and can hardly get around and this morning we found one of the yearling ewes dead in the field. We don't know what happened to her. I heard the Pyrenees barking a lot last night from the gateway into the farthest field and this morning, I found them both lying beside the body, guarding her, I suppose, to keep the coyotes from coming in for a feast.

Posted by Dianne MacDonald at 6:36 PM