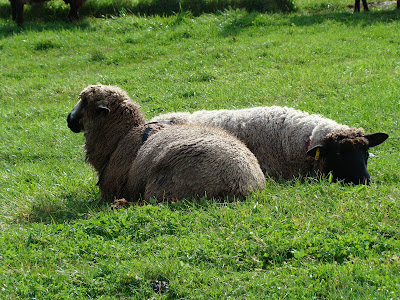 The boy has been put to work and, so far, he seems to know what he's doing. Ollie, the new CVM ram lamb who came home with me back in August is now doing what he was meant to do. I worked through the ewes on Wednesday, giving worm medication, trimming feet (and trimming a little off the backside there). When I finished with the ladies, I did the same for Ollie (except for the backside trimming), strapped the marking harness on him and turned him in with the group. 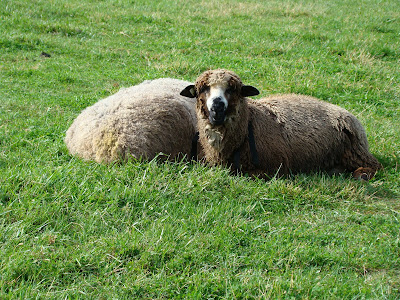 Miss Bossy tried to push him around some, but he mainly ignored her and checked everyone out. Yesterday morning, when I went to the barn, I noticed he had marked one of the ewes during the night. (And, see what a gentleman he is, still keeping her company. Look closely and you'll see a little of the yellow crayon mark on her rump.) So assuming all goes as planned, we should have our first lambs appearing around March 23rd!
I have really been enjoying the temperament of the CVM's. They went through a bit of a shy stage for a while, but have all turned into calm, friendly boys and girls. I can hardly wait to see what kind of fleeces will come from the combination of BFL/Romney ewes crossed with a CVM ram. It just has to be good!
It's the anticipation and optimism that keeps us shepherds going year after year (even though many of us vow at the end of lambing that we are never, ever, ever going through it again!).
Posted by Dianne MacDonald at 5:20 PM