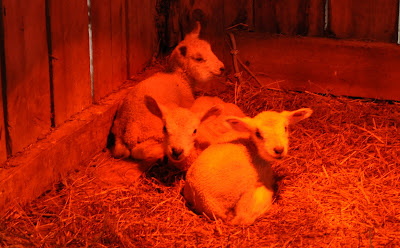 (Triplets-Basking in the glow of the heat lamp)

Busy, busy around here. Some of my girls are not sticking to my schedule, but we have made some progress. Five ewes have lambed, so far. The count is 2 singles, 2 sets of twins and 1 set of triplets--6 girls and 3 boys. Most of it has gone really well, with four of the ewes doing it on their own. The one that didn't had a huge single lamb and had we not been here and monitoring, I expect the ewe and the lamb would have died. It took Mike and I both to get him out. Pretty stressful scene there for a while.

The triplets were sired by Henry and the rest are Ollie's. I'm so anxious to see how their fleeces turn out. Several of the Ollie lambs have those distinctive CVM markings on their faces and silver on their bodies. Marcel's lambs won't hit the ground for several more days. I would love to have some better pictures of the babies, but it is so dark and rainy the glow from the heat lamp is about the best lighting I can find right now.
Spring time is struggling around here. We've had 50's and low 60's followed by buckets of rain, then cold. The trees are budding, daffodils and forsythia are blooming and we have a chance of snow in the next few days. Enough of this stuff!
Posted by Dianne MacDonald at 10:47 PM